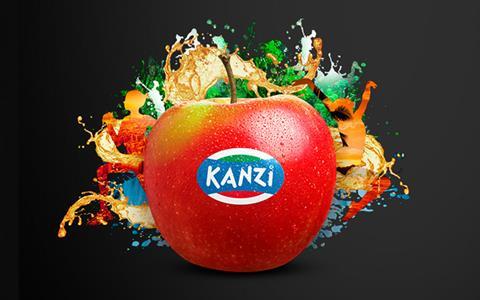 The company behind apple brand Kanzi says it has switched its focus from physical events and adopted a “Covid-proof” digital marketing strategy to engage with consumers and boost sales of the product.

Focusing on online media channels, the company is promoting Kanzi this season by raising awareness of what it calls the ‘Power of Great Taste’.

And it seems to be working. With a “dynamic and successful” first half of the Kanzi season now complete, sales volumes in Europe are apparently running around 15 per cent higher than they were a year ago.

“[We’ve seen a] very satisfying performance during the first half of the season,” the group said. “Further activations are planned for the second part of the marketing calendar.”

During that second phase, GKE will invite consumers and commercial partners alike to ‘Recharge with Kanzi’ and buy into its “irresistible taste and invigorating effect”.

For shoppers, there are some big prizes to be won. In several European countries, Kanzi’s top giveaway is a fully electric Mini car, while in Spain and the Netherlands, entrants could win a Playstation 5 and a weekend in a holiday home respectively.

“These Kanzi activations in the European markets will all be extensively communicated to consumers via social media channels and point of sale,” the group commented.

“So the upcoming two months will be busy in terms of social interactions and it will reinforce brand awareness, brand image and Kanzi's global position as the number two apple brand.“

The group added: “Kanzi is appreciated as an apple with a balanced flavour, which combines juiciness, sweetness and tartness, but at the same time is full of energy; very specific characteristics that contribute to the continuous demand from consumers.”

A third promotional push to boost sales of Kanzi is scheduled to take place as Southern Hemisphere Kanzi starts to enter the market, which is expected around May/June.

According to GKE, Kanzi’s European suppliers have been pleased with the sales and price levels achieved so far this season.

“The quality of the harvest this season was very good and once again Kanzi grower organisations are experiencing great satisfaction among their customers,” it said.

“This year, there was also a higher quantity of Kanzi apples available. Due to increased sales, Kanzi stocks are nevertheless at a comparable level as in the previous season.”

In Germany, increased marketing efforts and support from retailers who promoted the brand apparently resulted in a volume increase of more than 25 per cent.

Sales are also understood to have risen in Scandinavia, the Baltic countries, and the Middle East.