Keeping supply in touch with demand 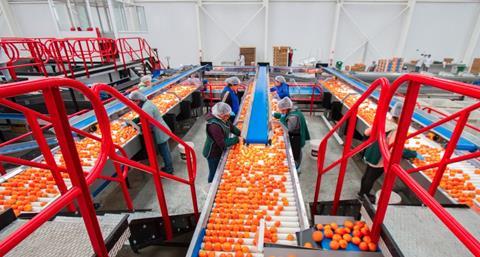 A citrus packing line at LCL's facility in Ovalle, Chile

Perishable logistics specialist LCL, part of the Chilean company Broom Group, continues to play a fundamental role in some of the fresh produce industry’s major trade flows, enabling fruit grown in the Southern Hemisphere and North America to reach destinations far and wide, sometimes on the other side of the planet.

With shippers seeing more and more demand from clients in Asia, the companies are placing more emphasis on developing their own links with the region, raising awareness of their ability to connect Asian buyers with growers, suppliers and shippers. To that end, three of their most senior representatives will be in Hong Kong for Asia Fruit Logistica 2017.

The trio are: Boris Aljaro, head of commercial for Broom Logistics and LCL on South America’s west coast; commercial manager Guillermo Lopez, who is responsible for loading activities out of Argentina via Chile; and Thomas Kang of Universal Freight Forwarders, a fully owned subsidiary of Broom Logistics based in Seattle.

Here, in the first of a two-part interview, LCL and Broom Group’s senior vice-president and chief strategy officer Ole Schack Petersen talks about trends in the global fresh produce trade, Asia’s increasingly active role in shaping those trends, and the group’s plan to invest further to develop its logistics handling capabilities in countries of origin.

As a third-party logistics service provider, you presumably get to witness first-hand many of the major trends that are happening in real time in the fresh produce business, especially when it comes to changing trade flows and the ups and downs of market supply and demand, is that right? Where have you seen important shifts in terms of increasing or decreasing flows of fruit worldwide?

If you look at your entire business in the fruit trade at the moment, where would you say are the really big flows of produce that you are helping along the way into their markets?

From those two regions of origin, which particular products are the big movers on those routes?

OSP: There’s no doubt that the big movers are table grapes, but we’re seeing more and more citrus – including soft citrus especially and lemons – from South America and South Africa. We see demand growing particularly for lemons into Europe but also Asia growing as a market. The soft citrus growth is from west coast South America, particularly Chile and Peru, into North America in the first place and also Europe second. Then blueberries are also a big thing for us, as they are for everybody. Last but not least are the avocados, for which it would seem there is no end to the growth.

Where have you seen the biggest shift in the last year to 18 months?

OSP: Well, as mentioned there’s been the cherries going into Asia rather than into the UK, which has probably been somewhat encouraged by Brexit’s influence on the rate of exchange. Exporters are looking at other markets because the UK pound is worth less in dollars than it used to be. I think this is very much the case for table grapes, citrus and avocados; and while it’s not true to say there is no increase in volumes to other countries like Indonesia, Malaysia and so on, the bulk of the increase is definitely China.

So China’s taking a lot more. Does that mean you’re having to change the kind of services you offer? What is the impact on your business?

OSP: I think the impact in a way is more complexity but hopefully also a better market with clients that need us to do more, rather than just moving his stock from, say, South Africa to Rotterdam. The shippers are much more dependent on being able to move their volumes to a minimum of specific destinations and of course the whole containerisation trend has meant that there is no big issue in moving physically on an ocean carrier. But it does require exact and precise opening of all the different trade lanes and thereby supply chains that we offer to the importers.

When you look at the Pacific north-west deal and the fact that more of this fruit is going to Asia, what does this mean in terms of the service you offer to exporters?

OSP: Well, when it comes to cherries it’s mostly airborne. That of course requires that we can fly it not only out of Seattle-Tacoma airport but we even have to go down to California or up to Vancouver to move it out to Asia. So space is of course of very high importance when you deal with a seasonal product like cherries.

More relevant to Asia is the fact that we have our chilled and cargo scanning facility very close to Seattle-Tacoma. That means we can serve any buyer any place in the world, be it in Asia, the Middle East or Europe. We don’t pack in the US, we receive the cherries immediately after they have been packed.

We prepare the airline containers that go into the body of plane, we chill the fruit for the customer and we also scan it because of the security act. If we didn’t offer these services, then there would be less capacity for fruit to move out in peak season.

As you look to expand your business, how is the trend towards Asia influencing your strategic approach in fresh produce? Are you trying to offer Asian customers an ability to plug into packing at source, for example with the new facility that you have in development for table grapes in Peru?

OSP: Yes we are. Let’s say if we have a Chinese buyer who wants to take produce all the way from source, and wants us to put his label on the fruit and use their packaging, we can pack it on their behalf. It just depends on how they buy the produce from the grower.

What investments are LCL and Bloom Group making in countries of origin in order to do this packing?

OSP: We have had a huge citrus and avocado facility in Ovalle, Chile, for a number of years, but we’re expanding that now and will be putting in a second packing line by the end of this year. Then we’re also looking at a second facility in the north of Chile as well as moving into Peru. We just bought land in the north of Peru and will be up and running with a coldstore and packhouse [for table grapes] by the third quarter of next year.

What other developments do you expect to see in Latin America?

OSP: Well, today we are also handling volumes out of Argentina to Asia and North America via Chile, which is a new thing happening because of lower rates and transit times. In Colombia, meanwhile, we will be moving more through our avocado packing facility; the industry there is growing by several hundred per cent each year, albeit from a low base. This season we will handle more than a thousand containers and the projection is that Colombia will be exporting up to five thousand containers a year.

We’ve spoken a lot about the origin side of things, but in the markets themselves, what kind of operations do you have? In Asia for example, what kind of services do you offer?

OSP: We don’t do anything on the ground in Asia unless we do so with a local operator. I don’t think the market is right for investment just yet because it still needs to mature a lot. We rely on the Chinese operators who are very good. We happily connect our chain with theirs to build the total logistics chain.

All the same, are you finding there’s more potential in terms of the quality of cold chain services appearing in Asia?

OSP: In countries like Malaysia, Thailand and China, absolutely. There’s been a lot of improvement.

What scope is there for the countries of origin in which you are active to evolve into import markets? Are there any that could be potential new destinations for you?

OSP: Yes, in fact one of the reasons why Thomas Kang, Boris Aljaro and Guillermo Lopez are going to be at Asia Fruit Logistica is to talk to US shippers about our ability to offer a door-to-door service between the Pacific north-west and Latin America. Of course, Latin America has become quite a big market for US apple and pear exports, as well as for fruit in general, and we’re definitely doing interesting things there.

The second part of Mike Knowles’ interview with Ole Schack Petersen will be published on Fruitnet.com on Monday 4 September.