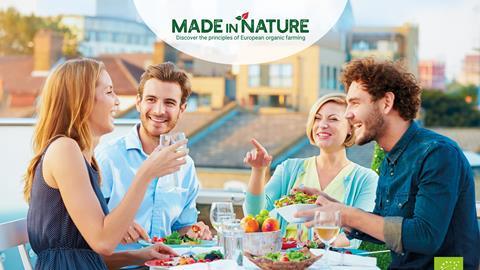 Made in Nature: discover the value of European organic

Organic farming in Europe shows signs of stable growth. Profits, land cultivated using organic cultivation, plus the number of farms and workers, are all increasing. On top of this, confidence in per-capita spending is rising among European consumers.

Made in Nature, a project run by CSO Italy, was funded by the European Union to promote consumption and awareness of organic products in Italy, France, Germany and Denmark. It has also contributed in a profound way to the positive wave that is now in motion.

Made In Nature is seeing an increase in the contribution of leading companies in the Italian market, which include: Apofruit Italia, Brio, Canova, Ceradini, Conserve Italia and Orogel.

Pushing forward and building on the previous years’ success, in 2022-2025 Made In Nature intends to strengthen awareness and recognition of the EU-level scheme with a new integrated campaign. This will focus on organic production and increasing competitiveness and consumption of organic products from the EU.

Traceability, sustainability, biodiversity and quality are the principles to which the new campaign aspires. This has also been set out in printed and online publications belonging to the main publishing groups, on the campaign’s website, and on social media channels such as Facebook, Instagram and YouTube, which have contributed to creating a true digital ecosystem.

This process is then topped off by a podcast called The Organic Recipe. Across 12 episodes, listeners are given a glimpse into the history and research behind organic products. The series also features input from international experts, and an advertisement that narrates the values promoted by Made in Nature, which will connect with audiences in a personal way.

In addition, the project is brimming with a collection of digital initiatives and events – From Field to Table – featuring food and lifestyle creators and leading organic fruit and vegetable producers taking part from the four participating countries. There is certainly no lack of material and participation in major trade fairs.

Finally, a project called the Made in Nature Zero Emission Orchard has been launched. It will certainly become a symbol for positive impact relating to levels of CO2 captured. Specifically, this concerns levels in the agricultural space close to companies involved in the project. More than ten fruit trees, organically grown, will be planted for each action pledged.

This is a campaign that aims to break through the barriers held up by the consumers that haven’t yet made the switch to organic farming practices. This is an inclusive journey that aims to unite diversity and different generations and media.

The Made in Nature project has been given a new burst of life against the background of organic numbers, which are more than encouraging and emphasise the importance of sharing and promoting the values of this type of production.

The Research Institute of Organic Agriculture has revealed that the market share of organic farming methods compared to conventional are steadily growing stronger and stronger. Over the last decade, the market has grown hugely.

As a result, Europe has become the world’s second-largest continent – following Oceania – when it comes to agricultural area devoted to organic farming techniques, which make up 23 per cent of the total.

Within this framework, Made in Nature – together with the EU’s To Farm to Fork – is definitely a project that will make steps towards reaching the goal of having at least a quarter of the land transformed to organic cultivation by 2030.