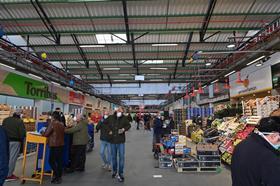 Mercabarna has teamed up with T-Systems, a digital services subsidiary of Deutsche Telekom and other partners to launch an app to facilitate food deliveries to people in need during the coronavirus crisis.

T-Systems has provided the technology and Mercabarna and some of the companies housed within the wholesale market will supply the fresh food and logistics and transport capacity.

In order to develop the app, T-Systems and Mercabarna organised a hackathon (meeting of programmers whose objective is the collaborative development of software). They were tasked with coming up with a fully operational application allowing the optimal distribution of fresh food to needy groups.

During 24 hours of uninterrupted programming, a team of 20 T-Systems experts, with the collaboration of Mercabarna executives, created a “solidarity marketplace” connecting the supply of surplus food from wholesale companies with demand from social entities and the logistics company responsible for transporting such food to the destination.

Two of Mercabarna’s fruit and vegetable wholesalers, Frutas Diego Martínez and Hermanos Fernández, collaborated with the project, together with logistics firm TAE Transports, which is also housed within the market.

The Red Cross in Catalonia will be the first organisation to benefit from the new app, with more being incorporated over the coming weeks.

The project is the latest initiative by Mercabarna to help disadvantaged people in the community. The market and its members contribute more than 100,000kg of fruit and vegetables a month through its Food Bank, which is sent to thousands of vulnerable people.

According to the director general of Mercabarna, Josep Tejedo, “Mercabarna has once again demonstrated its proactivity and solidarity to meet the needs of the most vulnerable during this health crisis and to continue guaranteeing the supply of fresh food to the population at the same time”.

Osmar Polo, managing director of T-Systems added: “The current Covid-19 crisis highlights the importance of technology in providing collaborative solutions and, from T-Systems, we have wanted to contribute our knowledge and technological capacity to help improve as far as possible the difficult situation that vulnerable groups are experiencing.

“We are confident that we will get out of this crisis soon, and we believe that technology will help us to do so.”
The new app allows non-profit organisations to access a bank of food products available in Mercabarna and request a delivery based on a catalogue created by the wholesalers.

The user can create profiles by type of company (wholesalers, carriers or associations), and the app includes statistics on orders and delivery times, as well as an order traceability system, with real-time tracking by state and location.