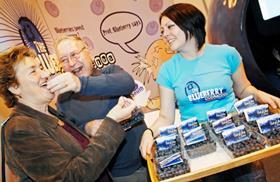 The Chilean Blueberry Committee (CBC) will this season roll out a new industry-wide promotional campaign in Europe under the banner Blueberries from Chile, the committee told Fruitnet.com.

The CBC will work with importers, wholesalers, retailers and trade media across Europe in a bid to build on the momentum created by consumer and point-of-sale promotions under the Blueberries from the South campaign.

The Blueberries from the South initiative, coordinated by blueberry suppliers from Chile, Argentina and Uruguay, will not take place this year as Argentina focuses its promotional efforts on the US market.

Instead, the CBC said it will organise independent activities for Chilean blueberries in its focus markets (the UK, Germany and Denmark), as well as the Netherlands and Russia for the first time.

The campaign is due to get underway at the end of November when trade media, importer and retailer workshops are planned to take place in the UK, the Netherlands and Russia to share the statistics, production methods, evolution and potential of Chilean blueberries.

In addition, point-of-sale promotions at retailers in the UK, Germany and Denmark will be held from late December through March 2012, the CBC explained.

The CBC is also organising a trade mission to Russia next year to coincide with the World Food Moscow 2012 trade show.

The CBC forms part of the Chilean Fruit Exporters Association (Asoex) and ProChile.

The full report is published in the November/December issue of Eurofruit Magazine.