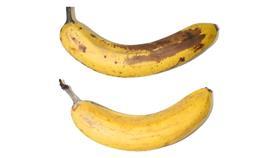 Lidl Switzerland has worked with the Swiss Federal Laboratories For Materials Science and Technology (Empa) to develop a cellulose protective coating that will make fruit and vegetables stay fresh for longer.

The partners said they hoped the novel coating, which is made from so-called pomace – squeezed fruit and vegetable peels – could reduce packaging and prevent food waste.

During tests, the shelf-life of bananas was apparently extended by more than a week.

'The big goal is that such bio-coatings will be able to replace a lot of petroleum-based packaging in the future,' commented Gustav Nyström, head of the Empa laboratory.

According to Empa, the idea is to process so-called pomace into fibrillated cellulose.

The coating is then either sprayed on the fruit or applied to the produce as a dip, which is said to be easy to wash off.

“As it is harmless to the consumer, it can also be consumed without harm,” added a spokesperson. “The potential of cellulose coatings is by no means exploited yet; there is the possibility of adding additives such as vitamins or antioxidants.”