NZ apple exports will be lower than forecast 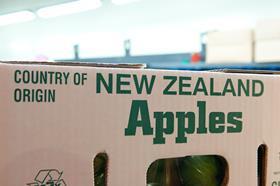 New Zealand’s apple exports will be around 14 per cent lower in volume terms this season than they were in 2020, limiting potential earnings as a result.

Industry association New Zealand Apples and Pears Inc (NZAPI) said it now expected the amount of harvested fruit going for export would be just over 347,700 metric tonnes, or 19.3m cartons.

The revised forecast is 3m cartons or 14 per cent below the export figure recorded for 2020.

As a result, the organisation said, the value of this year’s NZ apple export deal was likely to be around NZ$95m-NZ$100m lower than last time around.

In January, NZAPI predicted an overall NZ crop of 558,670 tonnes, 5 per cent lower than last season’s.

This reflected a shortage of available labour and significant hail damage in the Nelson and Central Otago regions.

The further decrease is understood to be due in part to a shortage of workers available to pick the apples, and also because the average size of apples being picked is smaller than first expected.

“As we near peak harvest, it has become increasingly clear that we will not achieve those initial forecasts”, says New Zealand Apples and Pears CEO Alan Pollard.

“Labour availability on orchard and in our post-harvest operations is well short of numbers needed by the industry despite doing all we can to attract New Zealanders into work. In addition, the fruit size is coming in smaller on average than we forecast.”

Of the varieties exported, Braeburn is the most significantly affected. Its revised estimate of 1,468,000 cartons is 44 per cent lower than 2020 levels.

“While the size profile is smaller than we expected, putting premium sizes into short supply, quality remains very good, and the fruit is well coloured,” says Pollard.

“New Zealand has a global reputation for reliability, consistency and quality, and 2021 will be no exception. Demand is strong in our key markets, but we remain concerned about continuing disruption to international shipping schedules and port congestion.”