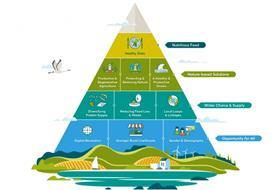 The world faces a “remarkable opportunity” to transform food and land use systems over the next ten years, according to a new report from the Food and Land Use Coalition (FOLU).

Such a transformation is considered necessary in order to achieve the targets for climate and sustainable development laid out in the 2015 Sustainable Development Goals and the Paris Agreement on climate change.

By 2030, according to the report, food and land use systems can help “bring climate change under control, safeguard biological diversity, ensure healthier diets for all, drastically improve food security and create more inclusive rural economies”.

“Such a pathway would place the SDGs and the Paris Agreement targets out of reach and within a few decades threaten our collective security,” it stated.

“Food and land use systems also generate ‘hidden’ environmental, health and poverty costs estimated at almost US$12tr a year,” the report revealed, “a number larger than the value of the system’s world output measured at market prices.”

Current food and land use systems cause up to 30 percent of total greenhouse gas emissions driving climate change, the report stated, and are the leading cause of deforestation.

Going by present trends, it said, half of the world’s population will suffer from malnutrition and related health effects by 2030. In addition, “underinvested, inequitable food and land use systems” consign many to lives of constant insecurity, it went on.

“The economic and social benefits offered by this programme would yield exceptional returns on investment,” the report concluded. “Total economic gains to society could reach an estimated US$5.7tr a year by 2030 and US$10.5tr a year by 2050.”