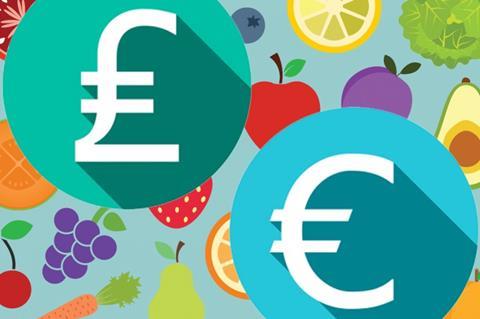 The pound has fallen to its lowest level against the euro since October 2017, a sign that British buyers and importers of fresh fruit and vegetables from the eurozone countries are set to find themselves under further economic pressure.

As reported by Bloomberg and other news outlets,the British currency was at 90.17 pence per euro, its lowest since 20 October 2017. Against the dollar it was US$1.2860, an eleven-month low.

The UK is heavily dependent on the eurozone, the monetary union of 19 EU member states including Belgium, France, Germany, Ireland, Italy, Spain and the Netherlands, when it comes to sourcing fresh produce.

Last year, according to trade data published by the ITC, it accounted for more than half of the £8.16bn (US$10.5bn €9.1bn) spent by the UK on imported fruit and vegetables.

Statistics published by the Department for Environment, Food and Rural Affairs yesterday suggested the UK’s reliance on imported fresh fruit and vegetables has increased considerably over the past decade.

For its part, the EU is currently responsible for supplying around one-third of those imports. For vegetables, the proportion of those sales was 76.4 per cent in 2017, while for fruit it was 41 per cent.