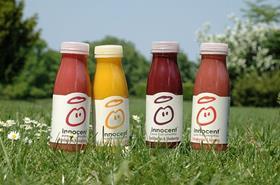 Sustainability is a challenge for the entire berry supply chain, and to present the case from the viewpoint of an FMCG company, Carly Griggs, sustainability agriculture manager at Innocent Drinks, introduced the latest stage of the company’s sustainability strategy at Thursday’s Global Berry Congress.

Outlining the strategy, which looks to 2023 and beyond, Griggs said the main focus was on bringing people and nature together. It centres on three pillars: building livelihoods, protecting biodiversity and reducing emissions.

“We want to use our business to drive a change in the power dynamics. We believe that everyone in the supply chain should benefit from the drinks we produce,” Griggs said.

“The idea behind the strategy is to build projects that we can test and then scale up beyond 2023 if they work successfully.”

To underpin the strategy, Innocent plans to launch a farmer innovation fund to encourage growers to try out new tools and ideas on their farms.

As a core ingredient of its range, berries have always played a key role in Innocent’s sustainability policy.

For several years the company has worked in partnership with Córdoba University with growers in Huelva, Spain (the main source of its berries) to help them reduce their water usage, through its Ferdoñana Project.

According to Griggs, this has enabled them to achieve a water saving of between 10 and 40 per cent without compromising product quality.

“Being sustainable is in our DNA. We want to make natural, delicious and healthy foods that help people to live well, and this applies as much to people in our operation and supply chain as to our customers,” she said.

To date, the project has enabled the company’s growers to save the equivalent of 343 Olympic swimming pools of water.

Griggs noted that the company had learnt some key lessons in its sustainability journey, not least the importance of being able to make the business case for sustainability issues to growers.

“At the end of the day, farmers are business people. There doesn’t have to be a trade off between sustainability and making money,” she said.

Another vital lesson is to involve growers from the very beginning – an approach that Griggs described as “more carrot, less stick”.

She explained how involving farmers in the design stage of the project is essential in order to achieve scalable change. This was clearly achieved in the Ferdoñana project, which ended up reaching 300 farmers in Huelva who together represent 58 per cent of the region’s production.

Griggs also stressed that even when projects did not go well, companies could learn a lot from them.