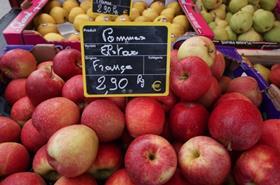 Buried away within the topfruit stock figures published by the World Apple & Pear Association this week, beneath a mountain of numbers relating to stock levels for each individual apple variety, there are two lines that arguably tell us more about the development of the EU apple business over the past decade than any other piece of information contained within the entire document.

When analysing numerical tables, data in the ‘other’ row or column doesn’t normally catch the eye. It’s usually a way of clearing away the less important categories in order to focus on the major ones while retaining an accurate result when bringing together overall totals.

It also doesn’t include the majority of the so-called club apples, which are listed together in a separate row called ‘other new varieties’ and include the likes of Ariane, Cameo, Jazz, Junami, Kanzi and Tentation. Together, these added a further 53,526 tonnes to the amount of ‘other’ varieties left to sell as of 1 March.

Where has the increase come from? The most obvious answer is Poland, which reportedly had 120,000 tonnes of ‘other’ apples in stock at the start of last month, compared with 20,000 tonnes at the same point in 2007. Other countries such as Belgium and the Netherlands have seen similar increases over that period, but the volumes involved are considerably smaller.

If you look back ten years, it’s clear that, wherever they originate, these other apples are playing an increasingly important role in pushing up apple supply on the European market. Back in March 2007, there were 89,757 tonnes of other apples left to sell, plus 2,718 tonnes of club varieties. Since then, the equivalent stock-check numbers have grown almost every year, reaching a combined total just short of 390,000 tonnes this time around. In the context of a 75 per cent increase in the EU's March apple stocks to 2.89m tonnes over the past decade, that's no small amount.

What it represents is a 321.4 per cent increase in the amount of other apple varieties waiting to be sold in Europe at this time of year. With the club apples, you could argue that they aren’t necessarily depressing prices but boosting value by offering premium quality. That may be true, but those varieties are far smaller than the ‘other’ category, and the sheer volume of additional fruit now present in the market must also be creating some downward pressure in terms of pricing.

In the context of Poland’s recent struggle to find alternative markets for its apples following Russia’s decision to ban EU fruit back in August 2014, the concern will be that Europe’s various markets will suffer under the weight of a greater volume of apples that don’t necessarily appeal to international buyers in the way that mainstream varieties like Gala, Braeburn, Cripps Pink and Golden Delicious do.