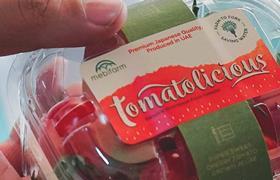 In January, Mebifarm in Al Ain became the first farm in the UAE to harvest crops using film farm technology, a revolutionary growing technique that requires no soil and very little water, according to a report in The National.

The method was developed in Japan following the 2011 earthquake and tsunami, which resulted in the Fukushima Daiichi nuclear disaster and subsequent contamination of local farmland.

The technique utilises a form of hydrogel, which reduces the amount of water required for cultivating plants, making it an ideal method for growing food in the desert, where both water and local soil quality present severe challenges.

Around 20 per cent of the farm’s area is dedicated to research and development, with tests currently being conducted on lettuces and herbs, according to the farm’s manager George Makau, while strawberries are also being considered.

The film works by soaking up water and nutrients through nano-sized pores, forcing the plants to work especially hard to extract the necessary nutrients.

The result is to increase the surface area of the plants’ root systems, boosting the sugar content of the plants and guaranteeing a sweeter cherry tomato than those cultivated in soil or hydroponically.

It is thought that the technique could make a significant contribution to food security in the country, where approximately 90 per cent of food is currently imported.

According to the farm’s general manager, Rania Halwani, film farming not only reduces the amount of water needed, it also limits the amount of fertiliser required, without compromising on either nutritional value or taste.

The farm has already gained GlobalGAP accreditation and is now working to attain local organic certification, which is currently limited to crops grown in the soil.