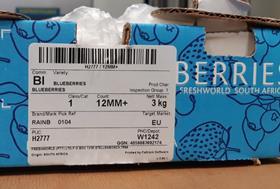 The ongoing dispute over the sale of proprietary blueberries allegedly grown without permission in South Africa has escalated further, after Australian company and licence-holder United Exports named the supplier and exporter in question as Ross Berries, part of the Rossouw Group, and Freshworld respectively.

The move came after Dutch customs officials reportedly stopped another container of fresh blueberries from South Africa – the second such seizure in the past ten days – and impounded a total of 16.6 tonnes of the fruit, citing a suspected breach of the European Union’s Intellectual Property, Counterfeit and Piracy regulations.

United Exports said it was 'reliably informed' that the Dutch Customs Authority had issued proceedings in the Netherlands against the shipper, against Freshworld, a South African fruit exporter, and against the Belgian customer which purchased the fruit.

Responding to the allegations, Ross Berries director Charles Rossouw said his company had attempted to resolve the issue in discussions with United Exports.

“We have agreed to sell what remains of [our] blueberry harvest for this season to United Exports on their proposed terms and prices,” he told Fruitnet. “The basis of this further negotiations was the release of the arrested blueberries of Ross Berries in the Netherlands.”

It is understood that Ross Berries and its parent group Rosle, which produces citrus and blueberries in the Loskop Valley region of the Limpopo Province, had offered to settle the matter in such a way as to avoid legal action that might jeopardise the remainder of its blueberry season.

“In a year that has been particularly difficult for all South Africans, these producers have considered that it would have been irresponsible to risk the livelihoods of their farmworkers and their families over the coming weeks,” Rossouw stated.

Crucially, Ross Berries continues to dispute claims being made about its rights as far as the varieties in question are concerned, suggesting that United is not automatically entitled to sell fruit produced by its own clients.

“These claims are without legal basis and merely form part of a broader effort by United to control the entire supply chain of these blueberry varieties in South Africa (and indeed internationally) and by implication fix the prices of the fruit,” Rossouw argued.

“In fact, it appears that only approximately 50 per cent of the so-called OzBlu varieties are registered plant breeders’ right in South Africa. The other varieties are not registered at all.”

As a result, he added, royalties paid in the past were not lawfully owed. “[We] have been advised that all the United varieties are without protection for the fact that United South Africa sold the plants commercially before the Plant Breeders' Rights were granted insofar as some application were approved subsequently.

“More broadly, the fact is that Rosle and Ross Berries acquired ownership of the blueberry plants on their farms when they purchased these plants from United Exports (South Africa). Having lawfully acquired the plants, these producers are lawfully entitled to export and sell the fruit of those plants to whomsoever they please without authority or consent required in terms of both the South African and European laws.”

With both sides arguing strongly that they are in the right, the dispute is likely to continue for some time. Unusually, that argument has now spilled out into the public domain.

'Ross Berries was attempting to export the fruit in flagrant disregard and abuse of the proprietary rights of United Exports, which holds the Community Plant Variety Rights in the OZblu blueberry plants and their fruit in the European Union and across the world,' said United Exports.

'This is the second such transgression after a shipment was seized last week on 27 October 2020 on the same grounds,' it added. 'The European Union Customs Authority, has notified the authorities at all points of entry across the European Union to monitor the import of South African blueberries into the European Union to prevent the further infringement of United Exports’ intellectual property rights in relation to its OZblu blueberry plants and fruit.'

Civil claims in various countries are also understood to be pending.

'The European Union Customs Authority recognises and protects plant-based intellectual property to safeguard the agriculture and downstream industries of the Netherlands and other agricultural economies in Europe and their trading partners,' the statement continued.

For Charles Rossouw, however, the matter is most likely to be resolved outside the courts. 'These and other issues will be resolved in the coming months by the appropriate forums,' he predicted. 'In the interim, we assure you that neither Rosle nor Ross Berries have conducted themselves unlawfully in respect of any of the OzBlu varieties.'

In the meantime, he said, Ross Berries would launch a counter claim. 'Ross Berries intendes to establish that the seizure of Ross Berries’ blueberries by the Dutch Customs authority was unlawful; and nothing other than an attempt to intimidate blueberry growers and exporters in South Africa with a view to controlling the blueberry market in South Africa.

'United has to date hereof merely alleged that the arrested fruit displays their alleged protected denomination and brand names which is factually incorrect and has thus not produced any proof.'