Costa Rican pineapples and bananas have long been a year-round presence in British produce aisles and soon consumers could be enjoying a much wider array of fruits and vegetables from the Central American country. 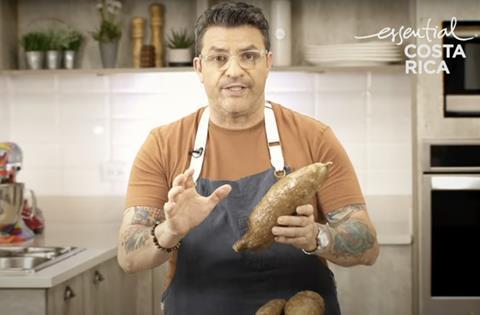 As trade promotion agency Procomer prepares to open its first commercial office in the UK, the sector has ambitious plans to diversify its export portfolio with the introduction of products including cassava, sweet potato, papayas and pitahaya amongst others.

“Costa Rica is about much more than just bananas and pineapples. We want to build on the success of our reputation as a reliable supplier and position Costa Rica as a source of a broad assortment of sustainably grown fruits and vegetables,” says Zacarias Ayub, who will head up the new UK office.

Next year marks a decade since the launch of the successful Essential Costa Rica country brand, which conveys the core values underpinning the country’s fresh produce exports – excellence, sustainability, innovation and social progress. In that time, exports to the UK have shown slow but steady growth, totalling US$229m in 2021. Together, bananas, pineapples, melons, watermelons and yucca accounted for 79 per cent.

“Costa Rica has a great brand image that gives confidence to importers, distributors and consumers alike,” Ayub continues. “They know that our suppliers are reliable and committed. We want to build long-term relationships based on mutual respect.”

At the same time, Ayub acknowledges that Procomer has its work cut out when it comes to raising awareness about the products themselves, many of which have yet to cross over into the mainstream.

“Vegetables like cassava and sweet potato are typically consumed by the Latin and African segment of the population, but they tend to stay there, they haven’t yet broken out into the wider population,” he says. “Clearly they need to be better understood in order to develop their consumption.”

To do this, Procomer plans to take part in key industry events with chefs performing live cooking demonstrations of recipes based around these ingredients. “Chefs are constantly looking for new ingredients, new recipes to develop, and these are very tasty products, very healthy products. This approach can increase awareness of our offer and help with its positioning in the UK market.”

It’s an approach that has already proved highly successful in Spain – a key market for Costa Rican produce and the gateway for imports into the rest of the European Union. Last year, Procomer launched its Magic Box campaign – whereby distributors were sent a box of ingredients, together with a recipe, which they were invited to prepare with the help of a ‘virtual chef’.

Here in the UK, the association wants to take the chef idea a step further by identifying key distributors who specialise in Latin American produce and introducing them to Costa Rica’s either virtually, or through physical events like trade shows.

Ayub says he is already in talks with a number of retailers, including Waitrose. “Given our strong commitment to quality and the social and environmental conditions under which our products are grown, we see ourselves as a good fit for the premium end of the market. We’re less about massive volumes and more about added value,” he says.