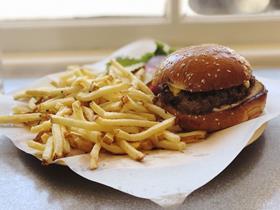 One in four places to buy food in the UK are fast food outlets, according to the report Photo: Sarah Stierch

That was the Food Foundation’s call to arms following the publication of its annual Broken Plate Report,which called for structural changes to ensure every adult and child has access to a healthy and sustainable diet.

Using 10 metrics, it provides a powerful picture of the UK’s “broken” food system – and what it calls “the lack of progress made to improve food security, obesity levels and sustainability”.

Of particular concern are the UK’s critical levels of obesity, dietary inequality and its increasingly obesogenic food environment, the Food Foundation said.

The study shows that the impact of Britain’s food system continues to be hugely unequal, with children from the poorest 10 per cent of households being 10 times more likely to be living with severe obesity than the richest 10 per cent at age 11.

This year’s Broken Plate report is the third in the series, tracking UK progress in changing the food environment so that diets can transition towards more healthy and sustainable outcomes.

The report was published ahead of Part Two of the National Food Strategy, led by Henry Dimbleby, which is expected to contain strong and urgent recommendations to government on managing the environmental impacts of food production.

It is set to include an in-depth analysis of the climate crisis, biodiversity, pollution, antimicrobial resistance, zoonotic diseases (diseases that can be transmitted from animals to people), the sustainable use of reseources, and the enironmental impact of meat production.

Part One, published in July 2020, highlighted the connection between obesity, poverty and the UK’s high Covid-19 death toll.

Anna Taylor, executive director at the Food Foundation, said: “With the National Food Strategy just around the corner and the task of rebuilding post pandemic now underway, there has never been a more opportune time for the government and businesses to face the challenge of fixing our food environment head on.

“Bold action will be required if we are to safeguard the future health of our children – but is by no means impossible.

“This year’s Broken Plate report highlights that our current food environment is failing to deliver diets that are just, healthy or sustainable with this having very real health implications for millions of citizens.”

Dr Kate Ellis from the MRC Epidemiology Unit at the University of Cambridge stressed that healthier foodremainsmore expensive than less healthy food per calorie.

“For people with less money available it is likely to be harder to afford and therefore eat varied and healthy diet rich in fruit and vegetables,” she said.

“This leaves people reliant on less healthy, energy dense foods to make up the majority of their diet. While these price differences remain, it will be hard to tackle dietary inequalities in the UK.”

Key metrics from the report

The affordability of a healthy diet:The poorest fifth of UK households would need to spend 40 per cent of their disposable income on food to meet Eatwell Guide costs. This compares to just seven per cent for the richest fifth.

The cost of food:Morehealthy foods are nearly three times as expensive as less healthy foods calorie for calorie.

Sugar in children’s food. Some 96 per cent of yogurts and 92 per cent of cereals marketed towards children contain high or medium levels of sugar.

Wages: In 2020, 25 per cent of workers in the food sector earned the minimum wage or below compared to 11% per centof workers across the UK.

Weight:Children in the most deprived fifth of households are almost twice as likely to have obesity as those in the least deprived 20 per cent by age 4-6.

Diabetes:There are almost 10,000 diabetes-related amputations carried out on average per year, an increase of 24 per cent in the past five years.