The Port of Dover has unveiled three ambitious targets that it says will put it at the vanguard of decarbonisation within the UK ports industry. 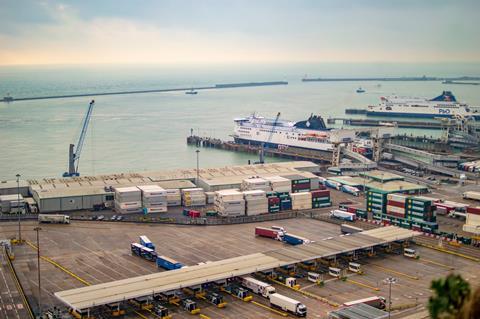 Its plans, announced today (3 May), will help position Britain as a global leader in delivering one of the key COP26 commitments following the UK government’s hosting of the global climate summit last November, the port said.

Unveiling its targets during a visit to the port by Maritime Minister Robert Courts, the port said it aims to further reduce its Scope 1 and 2 carbon emissions (direct and indirect green house gas emissions) by sourcing alternative fuels, using renewable energy where possible, electrifying the port’s landside fleet, encouraging cycling to and from work, and offsetting emissions through natural or economical means. It has set a target to be carbon net zero scope 1 and 2 by 2025.

The port added that it aims to go one step further and be carbon net zero scope 1,2 and 3 (which typically covers all emissions the organisation is indirectly responsible for, up and down its value chain) by 2030.

And finally, the port said its third target is to become the world’s first high-volume Green Shipping Corridor.

”We are working with the wider port and local community, supply chain, customers and ports sharing the short strait corridor to detemine and target collective carbon zero ambitions towards creating a Green Corridor beyond 2030,” the port said in a statement.

Handling £144 billion of trade, the Port of Dover provides almost 60 per cent of all ferry journeys between the UK and Europe that carry around one-third of all HGVs using major UK seaports.

It is also a leading UK cruise and cargo port, and work across the business has already seen Dover reduce its carbon footprint by an impressive 85 per cent since 2007, port authorities said.

Port of Dover chief executive Doug Bannister said: ”Dover is located at a critical intersection where global trade routes meet the primary gateway between the UK and its main trading partner, the EU.

”Having the fastest transit times and the most frequent services situated next to the world’s busiest shipping lane, we already lead the way in how much activity takes place here. We can and must, therefore, also lead the way by delivering a profound improvement in the overall carbon footprint of UK supply chains, which we can do much faster because of our geographic advantage.”

He added that market commitment to the route shows that trade through the Port of Dover is set to grow in the years ahead, and so Dover’s commitment will also help deliver on the Government’s ambition for clean maritime growth as part of the Department for Transport’s flagship Maritime 2050 strategy, the Clean Maritime Plan and the Clydebank Declaration announced in Glasgow at COP26.

Commenting on the Port of Dover’s target announcement, Maritime Minister Robert Courts MP said: “I welcome the Port of Dover’s commitment to champion the crucial journey to decarbonisation. The challenging targets demonstrate the leading role Dover wishes to take in delivering our Clean Maritime Plan and ensuring Britain remains at the forefront of the maritime industry in tackling this global issue.”

The port added that it is committed to continual improvement and is working towards zero harm from its own activities, including zero injuries, zero waste to landfill, zero pollution events and zero single use plastics, among others.