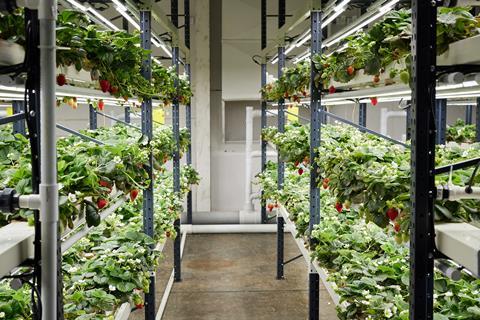 The New Zealand government has committed nearly NZ$1m (US$630,000) to a new project with 26 Seasons to grow strawberries indoors.

Spray free strawberries will be grown in 26 Seasons’ proprietary growing system with the aim of extending the availability of the fruit in New Zealand.

“Strawberries are a staple in the Kiwi diet in summer, but many would agree that our strawberry season is all too short,” said New Zealand agriculture minister Damien O’Connor.

“We’re partnering with 26 Seasons through Sustainable Food and Fibre Futures to identify the most cost-effective method to grow high yielding, out of season strawberries using a controlled environment growing system.

“We’re committing more than NZ$920,000 over two years to this project through the Ministry for Primary Industries administered fund. It will enable research to help in scaling up production using 26 Seasons’ proprietary growing system, which the company has tested successfully in a preliminary trial.”

26 Seasons’ indoor hydroponic system recycles water, and uses mobile vertical racks and pulsing light, so it doesn’t require the pesticides or herbicides that are usually an essential part of large-scale strawberry production.

“26 Seasons is currently using this method to produce microgreens, and while controlled environment growing systems are already being used around the world, this is the first of its kind in New Zealand. We also believe it’s one of the first examples globally of growing strawberries this way,” said O’Connor.

O’Connor said 26 Seasons had already successfully conducted a pre-pilot small-scale trial of 1,000 strawberry plants in inner city Wellington, with the help of funding from Callaghan Innovation.

“The time is ripe to scale up, and this new pilot project has just undergone a trial of growing up to 8,000 plants in a larger building in Foxton,” he said O’Connor said.

“This will be a stepping-stone to 26 Seasons’ aim of full commercialisation, which would require between 60,000 and 200,000 plants per site.”

The project will aim to produce fruit with an equivalent taste, look, and size to peak-season strawberries grown locally and conventionally.

“The business is aiming to grow plants that will produce fruit for at least eight months of the year at a commercially viable yield per plant,” O’Connor said.

“This project has the potential to benefit the horticulture industry in New Zealand, both environmentally and economically.

“The controlled environment farming technology uses 90 per cent less water and 90 per cent less land than traditional horticulture – plus the strawberries can be grown fairly consistently without spraying them with pesticides or herbicides, so the environmental benefits are enormous.

“If successful, 26 Seasons will share its technology with growers of other high-value crops by licensing the intellectual property.”