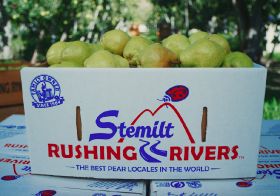 Stemilt Growers has hailed the impact of it Rushing Rivers pear programme, which highlights the fact that the fruit is produced locally in the Wenatchee and Entiat River Valleys in Washington State.

The label was first introduced in August 2014 to share the story of where and how the pears are packed, and came in conjucntion with new packaging, POS signage, and a short video shot by a drone helicopter.

“The Rushing Rivers pear label was developed to share the story of where and how our pears are grown, something that two out of every three consumers have stated through research studies that they want to know,” said Stemilt marketing director Roger Pepperl. “The Wenatchee and Entiat River Valleys are heritage sites for growing pears and the place where our pears have called home for decades. The Rushing Rivers label informs consumers that the pears they are buying come from a special place, and from multi-generational family farmers who are passionate about quality and flavour.”

Pear harvest in Washington State started and ended earlier than ever before following an early spring and warm summer temperatures, and Stemilt finished picking its share of the Northwest pear crop in late September.

According to Pepperl, pear crop volumes are down slightly from last year but quality and flavour of this year’s Rushing Rivers pear crop is characteristic of any crop grown in the two renowned river valleys. Fruit size is a differentiator between this year and last for key pear varieties like Bartlett, green d’Anjou and red pears.

“Fruit size often slows down with warm summer temperatures, and the big heat wave we had in Washington State this summer means that most pear varieties will trend a size smaller this year,” said Pepperl. “This makes bagged pears a great option for retailers."