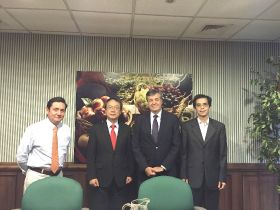 Finding ways of improving the competitiveness of Chilean fruit in the Taiwanese market was one of the key topics discussed during a meeting this week in Santiago between the new Taiwanese ambassador to Chile, Jaime Chen, with representatives from Chilean fruit export association Asoex.

Taiwan is becoming an increasingly important destination for Chilean fruit, importing 51,989 tonnes during the 2014/15 season. This included more than 1.9m cartons of apples (principally Fuji), as well as around 500,000 cartons each of nectarines, table grapes and cherries and 150,000 cartons each of kiwifruit, plums and blueberries.

However, Asoex president Ronald Bown pointed out that the at present Chilean fruit is unable to compete on a level playing field due to the existence of the ANZTEC trade deal between Taiwan and New Zealand.

The economic cooperation agreement, which has been in force since 2013, allows all New Zealand fruit with the exception of apples and cherries to enter Taiwan tariff-free. By contrast, most Chilean fruit exports to Taiwan, including apples, nectarines, plums and kiwifruit, are subject to a 20 per cent tariff. Cherries and blueberries, meanwhile, have to pay a tariff of 7.5 per cent.

“The fact that New Zealand fruit can be shipped tariff-free affects the competitiveness of our sector, and holds back Chile’s export growth in this market,” Bown said.

Describing the meeting a “very cordial”, Bown said it was evident that the ambassador was supportive of the idea of helping the Chilean fruit industry.

The Asoex president revealed that since ANZTEC came into force, New Zealand has seen a surge in fruit shipments to Taiwan.
“Exports of New Zealand apples, for example, increased by 304.4 per cent between January and July 2014, while shipments of Chilean apples rose by just 35.3 per cent during the same period,” Bown said.