Breakthrough in fight against Panama Disease 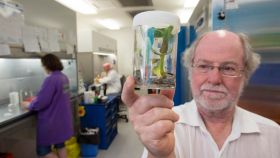 The Queensland University of Technology (QUT) has conducted the first ever GM field trial in heavily TR4-infested soil of bananas modified with a gene taken from a TR4-resistant wild banana.

The field trial, which ran from 2012 to 2015, showed that one line remained disease-free for the three-year duration of the trial, while three other lines showed strong resistance, with 20 per cent or fewer plants showing symptoms of the disease in three years.

By contrast, 67-100 per cent of the control banana plants were either dead of infected with the disease after three years.

The trial was conducted on a commercial banana plantation outside Humpty Doo in the Northern Territory.

Professor James Dale, who led the trial, said the outcome was a major step towards protecting the US$12bn global banana export business.

“These results are very exciting because it means we have a solution that can be used for controlling this disease,” he said.

Researchers are now planning to conduct field trials in Mindanao in the Philippines, where thousands of hectares of plantations are infested with TR4.