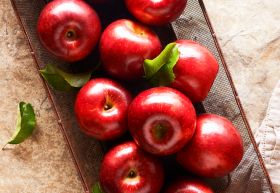 The campaign launching Cosmic Crisp, the new branded apple from Washington State, has announced partnerships with six influencers to help build awareness of the fruit.

The Cosmic Crisp ambassador campaign officially kicks off with an exclusive tour and private events in late September, 2019.

“The goal is to offer our ambassadors an authentic harvest experience and immersive education about this truly groundbreaking apple," said Kathryn Grandy, director of marketing for Proprietary Variety Management and manager of the consumer launch. "We are laying the groundwork for them to each tell the Cosmic Crisp story in a way that is meaningful to their audience and reinforces our differentiated brand.”

A cross between Enterprise and Honeycrisp, Cosmic Crisp is named for the apple’s starburst-like lenticels that can be seen on the surface, resembling the cosmos.

The apple will be harvested by growers throughout Washington for retail delivery in December 2019.