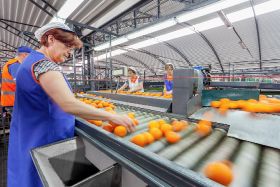 Spanish citrus producers fear that the combined effect of exchange rate fluctuations and Brexit could cause severe disruption to global markets during the 2018/19 season.

The Citrus Management Committee (CMC), the umbrella group for Spain’s biggest private citrus producers, has warned that the sharp depreciation of the currencies of some of the world’s biggest citrus producing countries such as Egypt, Turkey and Argentina is boosting their competitiveness and creating an unstable climate for Spanish exporters.

“Together with the uncertainties surrounding Brexit, these destabilising factors pose a serious threat to the normal development of the citrus campaign,” the CMC said in a statement on Monday.

The committee urged the Spanish government to “reduce to a minimum the regulatory burdens on shipments to the UK, which will undoubtedly become more complicated once it has left the EU in March 2019”.

The value of the Egyptian pound and Turkish lira has fallen by 106 per cent and 105 per cent respectively over the past two years, while the Argentine peso has seen its value fall by 153 per cent during that time.

“As we know, currency depreciations or devaluations make a country’s exports more competitive,” the CMC said.

The impact has also been felt in none-EU markets like China, the committee noted. Egypt recorded a 204 per cent rise in orange exports to China in 2016/17, and although there are still no official figures for the 2017/18 campaign, the African country looks to have consolidated its position as the number one supplier to the Chinese market.

“Turkey looks to be following a similar path in the current season, with the diplomatic crisis with the US resulting in the Turkish lira falling 65 per cent against the euro – bringing its total devaluation for the past two years to 105 per cent,” the CMC continued.

In light of the lower labour costs and looser social and environmental standards in Egypt and Turkey, the CMC urged the European Commission should tighten up quality and phytosanitary controls on imports from these countries, “or face a possible barrage of shipments from unprofessional operators lured by the monetary euphoria”.

The committee said Brexit was creating added uncertainty, with exporters likely to be severely affected by the reintroduction of border controls and other logistical and bureaucratic obstacles in the event that no deal can be agreed.

These doubts and uncertainties could also impact on sterling, with some analysts suggesting that the euro could reach parity with the pound, which would make imports from other non-EU countries more competitive.

The CMC has called on the Spanish government to introduce safeguards to protect the country’s producers.

“We urge the authorities not to impose any controls at origin unless they are requested by the recipient, while also guaranteeing that once the UK leaves the EU it will not be permitted to re-export citrus from non-EU countries back to Europe,” the committee said.