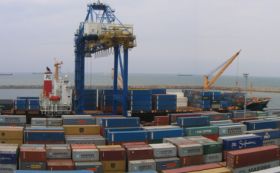 APM Terminals has signed a memorandum of understanding with the Ghanaian government to add four deep-water berths to the port of Tema, increasing its annual capacity to 3.5m TEUs.

The Danish company said the agreement included a “private investment” in excess of US$1bn by Meridian Port Services (MPS) of which it holds a 35 per cent stake. Bolloré Africa Logistics and Ghana Ports and Harbours Authority are the other shareholders in MPS.

The deal also includes the dredging of the port’s access channel enabling the port to accommodate larger vessels and the construction of a six-lane highway between Tema and the interior port of Accra.

“Both in the short- and long-term view we see Ghana as a country with great potential,” Peder Søndergaard head of Africa and Middle East activities in APM Terminals told Reuters.

Around 70 per cent of Ghanaian inbound and outbound cargo passes through Tema, and MPS handles approximately 80 per cent of the port’s container traffic, which in 2013 stood at 670,000 TEUs.

Since MPS was established in 2007 some US$145m has been invested upgrading the port to expand capacity and improve road and rail links.

Søndergaard hailed MPS as a successful private/public partnership which he said had brought global trade to local shores. “APM Terminals looks forward to taking the next step to drive the development of a world class port expansion which can serve the country of Ghana in the coming decades.”