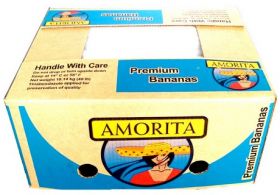 Amorita, which translates as Little Love, will be used to market top-quality bananas to customers and receivers in Europe, the Middle East, China, New Zealand and the US.

Ben Reed, the company’s commercial director, said the new brand has been a long time in development and could soon be applied to other products in the AllFresch portfolio.

“We have done a lot of work on the Amorita brand,” he explained. “At the moment it will only be used for premium bananas but we will move on to other fruits starting with limes produced by our partners in Mexico later in 2015.”

Reed said the company believed there was a gap in the market for a new premium produce brand.

“When you look at some of the new and emerging markets there are only the multinationals present in terms of popular brands,” he observed. “There has been more focus on the price point than on a high-quality product which can compete with the multinationals.”

Amorita bananas will be packed in various weights according to demand. “We feel we can achieve a premium for this top-quality fruit with a brand to identify it so that when people buy it they can be assured of a premium banana.”

Starting with limited volumes of fruit from Mexico, AllFresch has managed consignments to both the Netherlands and New Zealand – the latter in partnership with Fresh Direct in New Zealand for a number of months.

Shipments leaving Ecuador in week five were also due to take the new brand to China and the Middle East.