Grupo AN, Unica to merge 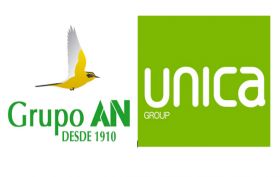 Under the terms of the agreement, Unica will be in charge of the group’s fruit and vegetable exports, incorporating AN’s production, which consists mainly of cruciferous vegetables, apples and conference pears. AN will handle sales to the domestic market from its headquarters in Tudela, Navarra, from where it will also oversee the group’s prepared and frozen operation.

“The aim is to consolidate our position in all markets – both internal and overseas – and in all sectors, be they fresh, conserved, ready-to-eat or prepared, in order to achieve greater efficiency and better defend the interest of our grower members,” the companies said in a statement.

Unica is made up of seven cooperatives in southern Spain: Casur, Cabasc, Cohorsan, Cota 120, El Grupo, Ferva and Parque Natural. Between them they have 2,000ha of greenhouse production and 700ha of open air production. The group expects to market around 230,000 tonnes of fruits and vegetables this year with an equivalent sales value of €215m.

Both companies said they shared the same philosophy and would be looking to incorporate further members into the group in the future.

European Vegetable Strategies 2015 takes place in Brussels on 6-7 May 2015. Please click here for more information and to register.