The second degree cooperative continues to expand, with six companies joining in the past two years 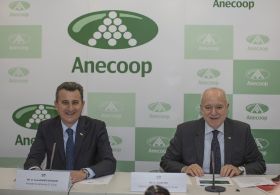 Anecoop has posted the strongest results in its 41-year history, with the incorporation of new members and expansion in key segments including exotics and convenience lines lifting sales for the 2016/17 campaign by 3.8 per cent in value and 6.8 per cent in volume to €663.5m and 835,000 tonnes respectively.

During Anecoop’s annual general meeting in Valencia on Thursday, president Alejandro Monzón, said the results demonstrated the company’s “optimal business management, which prioritises volume growth and the integration of new partners so that we can be more competitive and face the challenges of the market with new projects that reflect present consumption trends”.

These include its organics range, sales of which have risen from €6m to €40m in the past five years, and its fresh-cut offering, which saw sales almost double to €2m.

In fruit, the company said watermelons were consolidating their positioning in supermarket aisles on the back of varietal innovation, with sales reaching 130,000 tonnes, while kaki sales topped 100,000 tonnes. Pomegranates, kiwifruit and exotics were among the new products that are strategically important to the group.

The company continues to extend its geographic coverage through the incorporation of new members, which has led to an improved offer of topfruit (principally from the Ebro Valley), cherries, and melons.

The past two years has seen the incorporation of six new companies into the group including, most recently, Lleida-based stonefruit specialist Fruits de Ponent, bringing the total number of members to 69.

Vegetable sales remained similar to the previous campaign in volume, although the group saw a sharp rise in prices, due principally to the supply issues caused by last winter’s adverse weather.

Although vegetables account for a smaller proportion of sales than fruit, Anecoop highlighted the strong performance of its French subsidiary, which saw a 40 per cent increase in sales compared with the previous campaign.

Only citrus registered a fall in sales, due mainly to the fall in production caused by adverse weather.

“The orange and mandarin campaigns were characterised by low productivity, with sales similar to the previous year, which led to a fall in returns. In lemons and grapefruits there was a significant drop in prices, offset by the increase in production,” the company said.

Outside fruits and vegetables, the group’s wine business also grew strongly, with sales increasing 17 per cent to top the €30m mark.

Anecoop’s director general, Joan Mir, described 2016/17 as “a very intense campaign” that had produced “the best results ever achieved by both Anecoop and its member companies”.

The group currently exports to 73 countries, with Europe accounting for the bulk of sales (90 per cent). France tops the table, with 192,000 tonnes, while Spain was in second place for the second year in a row, with sales of 171,000 tonnes, and Germany was third on 123,000 tonnes.

Eastern Europe is the market that has seen the fastest growth, with sales up 10 per cent in 2016/17 thanks to the expansion of Anecoop Polska.