The Israeli breeder and producer is continuing to invest in new pitaya varieties, as it seeks to achieve steady supplies throughout the season 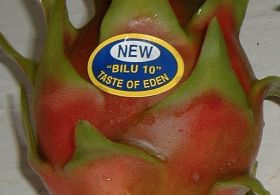 The Israeli pitaya is distinguished by its red, pink and purple flesh, which, according to Israeli growers, lends it a superior taste to white-flesh varieties, which are mainly produced in East Asia.

However, this has not affected the desire of the country’s leading breeders and producers, including Top Eden Fruits, to come up with new varieties of the fruit.

There are around ten pitaya growers in Israel, of which Top Eden Fruits is the largest. The company’s total annual production stands at around 150 tonnes, of which approximately 100 tonnes is exported.

The company’s farms are located near Rehovot in the Central Region of Israel and, according to owner Yossi Zaphrir, the area under cultivation is expanding each year.

Zaphrir, who originally bred and developed the Bilu varieties, is now producing innovative clones in an effort to achieve a range of varieties that will provide a steady availability of fruit rather than the current short cycles of insufficient volumes.

Israeli growers have been pleasantly surprised by the rapidly increasing interest in pitaya, which fetch good prices on the local market.