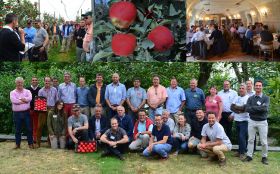 In partnership with French apple grower-marketer Innatis Group and French apple nursery Dalival, IFO hosted an HC2-1 field day on 29 August in Angers, France, for a delegation of apple producers from the US, Mexico, Chile, South Africa, Australia, New Zealand and Germany.

“Already under test in several countries around the world, this HC2-1 field day marked the beginning of the international development phase of this new generation variety,” IFO said in a statement.

Described as sweet, crunchy, juicy, with a refreshing taste and a unique shiny, almost glowing pink-red colour, HC2-1 ripens towards the end of August and stores well, IFO said.

“HC2-1 is an early and highly productive variety that has all the characteristics that customers are looking for, and its colour and uniformity make it clearly stand out of the shelves,” the company said in a press release. “HC2-1 is the result of more than a decade of work by IFO to present an apple with outstanding characteristics.”