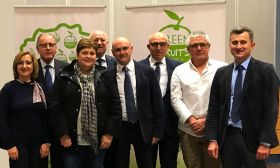 Green Fruits, the new group formed last year by three of Anecoop’s biggest citrus cooperatives, said it has made steady progress in its first full campaign, despite 2018/19 being “one of the worst seasons in years”.

The entity, which is made up of Citrícola de La Safor (Coopcisa), Novacitrus and Cooperativa Agrícola de Pego (Coopego) who together produce more than 65,000 tonnes of citrus a year, says it managed to sell 100 per cent of the output of its 1,200 grower members at above-cost prices.

President Francisco Gilbaret put Green Fruits’ solid performance down to its integration within the Anecoop Group.

“In spite of the complicated campaign the results for our partners have been better than expected with returns, in some cases, above the field purchase price,” he said.

“We are convinced that alone, each of these cooperatives could not have achieved the results that they obtained together.”

Green Fruits said a decision that each of its facilities would specialise in packing specific varieties had allowed it to cut production costs and offer a better service to its customers.

Joining forces had also enabled the group to implement new projects such as a Zero Waste initiative, and led to better control of the use of pesticides.

“There’s no doubt that facing the worst citrus campaign in years together and with a common strategy has helped to alleviate the dismal prices in the market,” said Pepe Pastor, president of Coopego.

Anecoop president Alejandro Monzón said the results sent a clear message of encouragement to growers that unity was the best defence against complex campaigns.

“Companies in the agri-food sector have shown that we know how to adapt to the times and take on new challenges,” he said.

“For this, it is essential to gain competitiveness, greater concentration and diversification of the offer, in addition to the joint and optimised management of infrastructure and production.”