On the Inka trail 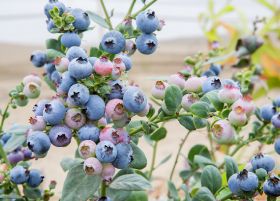 Inka’s Berries has high hopes for a trio of new blueberry varieties especially adapted for the Peruvian industry that it has developed through its breeding programme with the University of Georgia.

The first, Salvador, has been on the market since 2017, while Matías and Abril are due to be launched commercially in the coming months. All three are characterised by their high yield, firmness and larger berry size.

“Having undergone rigorous testing, all three varieties have been shown to adapt well to local growing conditions, and are characterised by their high yield, firmness and larger berry size, which makes them extremely attractive to Peruvian producers,” commercial manager Rodrigo Price tells Fruitnet, adding that trials of the new cultivars are also underway in other countries including Mexico, Spain and Morocco.

Most of the blueberries grown in Peru are sourced from US genetics, with varieties like Biloxi, Emerald, Misty and Spring High dominating the productive landscape.

Biloxi has been the clear market leader up to now due to its high resistance, rapid growth and good yields. However, its main disadvantage is its size as consumers prefer larger sized berries rather than the medium sizes that characterise Biloxi.

Inka’s Berries new cultivars can not only reach sizes of up to 22mm, but also have an average yield of 50kg per hectare, 15 per cent more than Biloxi. By 2020, there will be an estimated 250ha of Salvador production in Peru, and Price expects Matías and Abril to be similarly well received by growers.

He notes that with rising global production set to exert increasing pressure on the market in the coming years, having access to the right varieties that have been specially developed for local conditions will be critical in maintaining profitability.

“These variables – yield, calibre and shelf life – are hugely important as they allow us to reduce costs and be more competitive in the international market,” he continues. “Since Asia in particular is an extremely attractive market, firm varieties with a long postharvest shelf life will help Peru to gain market share in the region.”

In all, Inka’s Berries has more than 35 advanced selections which show strong and expects around five of these to be launched commercially in the short term.

The company’s nursery business, meanwhile, has been propagating plants in vitro for more than ten years, and has the capacity to produce around 5m plants a year, which it sells on the domestic market. It recently started exporting its plants to Mexico and plans are underway to open up other markets in South America and Europe.

Inka’s Berries also has a production and export division, which is on course to ship around 1,500 tonnes of fresh blueberries to Europe, the US and Asia in this year, with output climbing to 3,000 tonnes in 2020.

In order to accommodate this rapid increase in production, the company is planning to extend its packhouse at the end of this year and install a state-of-the-art packing line.