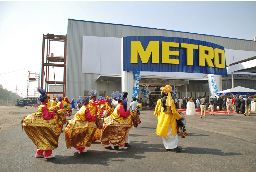 Metro Cash & Carry is trialing Pakistani mango exports to Europe by sea this year in a bid to dramatically cut freight costs and thereby boost export volumes to its global network.

Exporting by sea instead of air would reduce freight costs from US$1.2 per kg to US$0.3 per kg, thereby making Pakistani mangoes more affordable and resolving the issue of limited airfreight capacity from Pakistan, Mr Saeed said.

“If the trials are successful and sufficient volumes of quality mangoes are available, Metro can export 5,000 tonnes per season. That volume can significantly grow in the years to come, as Metro is present in 32 countries,” he said. “We intend to start exporting to the European sector and then expand gradually into other countries, such as the Ukraine and Russia, in a phased manner. Then possibly Vietnam and China in future.”

Metro conducted its first two mango sea trial from Pakistan to Rotterdam in 2008 in special Controlled Atmosphere (CA) containers with shipping giant Maersk. The first shipment failed due to improper cooling. Half of the fruit from the second shipment was sold in Germany, but the rest developed stem-end rot disease, due to lack of hot water treatment facilities, according to Mr Saeed.

But Metro is confident it will succeed this year. “We are very hopeful because we now know what was lacking in the previous two experiments. It is definitely a very doable project,” Mr Saeed said.

Metro’s Pakistani mango project follows an agreement with the Government of Pakistan to help develop the country’s agribusiness and exports. The retailer first trialled Pakistani mangoes in Germany by air in 2007 and 2008. Following excellent consumer feedback, the Metro Group decided to experiment with sea shipments to greatly increase the volumes for Europe, Mr Saeed explained.

Metro Cash & Carry first entered Pakistan in 2006 and opened its first wholesale centre in Lahore in 2007. The chain, which is headquartered in Germany, currently operates four outlets in Pakistan, with a fifth due to open on 26 March, 2009.