Uttar Pradesh’s mango exporters have received orders from Kuwait, and the first from Russia 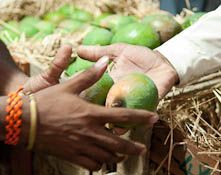 Dussehari variety mangoes will be exported under the Nawab brand, with 100 tonnes going from Malihabad to Moscow and 15 tonnes from Amroha to Damam in Kuwait, reported the Press Trust of India.

“It will be for the first time when mango would be exported to Russia.”

India is the world’s largest mango producer, and Uttar Pradesh grows is the highest producing state in the country, growing 20 per cent of India’s mangoes.

Despite that figure, only 46 tonnes of mangoes were exported last year from Uttar Pradesh, reported PTI.

Mango production in the state has dropped significantly this year.