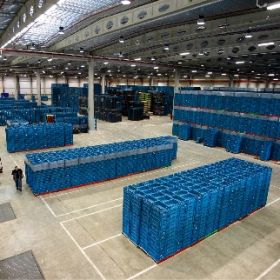 Returnable plastic crate pool organisation Euro Pool System International has announced it made steady growth in its business during 2007, handling almost 460m crate rotations (up 11 per cent) and pushing its turnover up by 9 per cent to €145m.

The growth seen over the past year was particularly apparent in Belgium and Germany, the company reported, but there was also an increase in demand for Euro Pool System plastic containers in other countries. "That is the reason why the pool organisation worked hard at expanding and modernising its washing and storage capacity throughout Europe," commented senior executive Arie de Bruijn.

Last year saw Euro Pool achieve major breakthroughs in Germany and Spain, with all German retailers and one Spanish retailer starting to use the green foldable containers. Belgian retailer Colruyt also changed from rigid containers to foldable ones, with a view to standardising its entire fresh produce chain to Euro Pool System containers.

Last year also saw the company open new depots in Geldermalsen and Venlo in the Netherlands, while in Italy preparations are in place to start building two new depots in the cities of Reggiolo and Triggiano. "The biggest growth, however, took place in Germany, where a second washing facility was built in the Dortmund and Mutterstadt depots," said Mr De Bruijn. "Preparations have started to build new depots in Maagdenburg and Munich."

According to a new study carried out by the University of Stuttgart and PE International, and presented by German institute Stiftung Initiative Mehrweg, returnable plastic containers are not only a more advantageous alternative from an ecological perspective compared with wooden and cardboard boxes, but they are also the most cost-effective packing system for the transport and packing of fresh produce.

Euro Pool System International has 45 depots throughout Europe and employs a total of 145 people in seven countries.