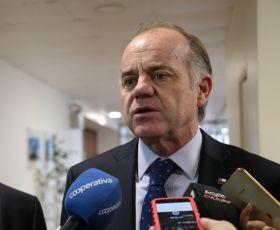 The Chilean Fresh Fruit Exporters Association (Asoex) said technical crews were in the fields assessing the potential impact of the storms, which struck the O’Higgins, Maule, Ñuble, Bío Bío and Araucanía regions on Monday evening and are believed to have affected stonefruit, cherries, blueberries, cherries and table grapes.

This is a critical period for Chilean fruit production, with crops like kiwifruit and grapes still in the flowering period, others like apples and stonefruit in the growth stage, and others, such as early cherries, approaching their harvesting period.

Agriculture Minister Antonio Walker said it was too soon to put a figure on the extent of the damage, but the situation was “quite serious”.

“We have very considerable damage in cherries, plums, nectarines, peaches, blueberries, apples and pears. We are very worried,” he told La Tercera.

“Orchards where fruit is destined for export are in a very labour-intensive stage…many of these orchards are going to have to direct their production to the domestic market and will not be able to export.”

In a statement released on Wednesday, Asoex said that while it is still too early to understand the full impact of the storm, information on specific commodities had started to emerge.

"For stonefruit (plums, nectarines, peaches and apricots), it appears that the storm was more of an issue for the late varieties that are still in the flowering stage. Some fruit has also fallen from the trees," the statement said.

The Chilean Blueberry Committee reported some damage to fruit in the Los Andes region, but said the main producing regions of blueberries were hardly affected, so the overall impact on volume is assumed to be minimal.

Regarding cherries, Asoex’s Cherry Committee informed that the orchards most affected were located in Granero, La Punta and Mostazal, but noted that with 30,000ha of cherries spreading from the Valparaíso Region to Aysen, many regions would be unaffected by the storm.

Nevertheless, the committee has decided to postpone the second cherry forecast, which was originally scheduled for 15 November, to the following week so it can account for the affect of the storm. Preliminary estimates suggest around 5 per cent of the cherry volume will be impacted.

In grapes, hail in the O’Higgins region has resulted in some damage to production according to Asoex. “The affected area is very specific, so our job is to further assess future impact, not just on the volume from that area, but also on quality of the fruit,” said Fernando Sat, president of the Table Grape Committee.

Finally, Carlos Cruzat, chairman of the Chilean Kiwifruit Committee, noted that kiwifruit orchards in the O’Higgins and Southern Maule regions were hit by hail and would need to be further assessed.

Asoex president Ronald Bown stressed that while the industry takes measures to be prepared for these types of situations, climate is always an unpredictable variable.

“The fresh fruit industry has made a strong investment in infrastructure, such as roofs for crops like cherries, to protect itself from storms,” Bown said.

“In reality, these types of natural phenomena will always have some impact and our producers will invest further to ensure the fruit being shipped to our global markets meets the expected quality standards. Delivering premium fruit to our customers is our top priority.”

Jorge Valenzuela, president of producer association Fedefruta, issued a message to growers stating: “At this difficult moment for fruit producers affected by the severe hailstorm, we want to assure you that we are working to get ahead of this difficult situation.

“We are gathering information and talking to the press to raise public awareness and request support from the necessary agencies.”