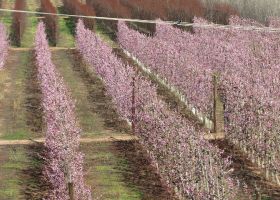 South Africa’s stonefruit growers certainly want to forget 2019 as soon as they can. However, despite an extremely tough year, there is the belief that the industry will bounce back in 2019/20, with plums in particular delivering much better yields.

The disappointment of the crops comes at a time when the South African industry is making great strides with its market development programmes in the UK, Germany and the Middle East.

In recent years these programmes, which are conducted with cross-industry support, have brought about remarkable change in the country’s offer.

For the record, this past year South African plum exports reached only 8.7m cartons, compared with 12.3m in 2016/17, which was the last fairly normal season. Nectarines rose slightly to 4.2m cartons, while peaches dropped by some 15 per cent to 1.8m cartons.

Apricots declined further to just under 600,000 cartons. Observers say the category has been hard hit by the effect of the drought in the Karoo, the heartland of South African apricots.

It is difficult to see an immediate recovery because many growers had to remove some of their orchards. There will be no replanting until the water problems are solved.

So, where does this season leave the industry? Stonefruit growers believe that they are now perhaps in a better situation with more water available and hopes that the present rainy season will live up to the winter promise.

If this happens, South African stonefruit can bounce back next year with a crop of around 12m cartons of plums and many more nectarines and peaches. “The trees are in the ground,” said one observer, “all we need is water and nature to work with us.”
It is however expected to be some months before nature would reveal its hand.

It remains to be seen what effect the past two years would have done to South Africa’s market position. Growers and exporters will now be on holiday till mid-July and will then head for Europe to pick up the vibe and make their plans for 2019/20.

What is certain, is that growers will have used the opportunity to remove some of their older orchards. It is not certain what they will plant in their place.