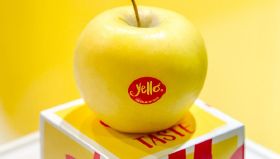 Italian apple marketers Vog and VI.P have reported encouraging early results in Europe and Asia for in-market trials of their new yellow-skinned club variety Yello, which has been billed as a potential upgrade on the established and hugely popular variety Golden Delicious.

Originally from Japan and produced in the South Tyrol region by both organisations, the branded yellow-skinned apple made its commercial debut in Italy in November 2016.

Its progress as a commercial proposition is apparently running ahead of schedule, with the product reportedly attracting a "very good response" during the 2018/19 campaign.

"It is a popular apple that is able to find its place in the wholesale and large-scale distribution markets," a spokesperson for the partnership said.

Feedback from customers and consumers has been "extremely positive" not only in Italy but also in Europe, where a number of commercial channels have been opened to test the fruit's suitability.

Tests in Asia have also been positive, the companies revealed.

Yello-branded apples are a variety called Shinano Gold, a cross between Golden Delicious and Senshu that is characterised by bright yellow skin, crisp flesh and a high level of natural sugars.

Meanwhile, investment in new planting continues, with more than 160,000 new trees – equal to around 40ha – planted in spring 2019.