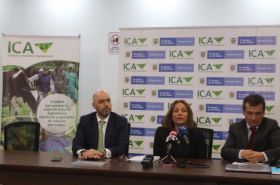 Colombia has finally confirmed the presence of the Fusarium TR4 fungus at two banana plantations in La Guajira and announced that measures to contain the disease would be extended to the whole of the country.

On Thursday, the Colombian Agricultural Institute (ICA) declared a national emergency with additional controls to mitigate the risk of contagion to other farms.

These include surveillance flights in the affected region to spot signs that the disease has spread to other farms; the installation of checkpoints to monitor and disinfect vehicles; segregating containers used in the affected areas and training workers in biosecurity measures. At the same time controls at ports, airports and border posts with be reinforced.

The Ministry of Agriculture is said to be considering providing loans to help small and medium producers implement the extra biosecurity measures.

ICA stressed that Colombia’s banana exports would continue and that systems to clean and disinfect containers had been installed at the port of Santa Maria to prevent the fungus from being spread via contaminated containers.

“There is a precedent for countries where the presence of Fusarium R4T has been confirmed continuing to export without restrictions, as the fruit has no risk for the transmission of the Fusarium,” ICA said.

Furthermore, the institute said the process of registering new production areas for export to China would continue. In July, the Chinese plant health authorities visited farms in the Magdalena region with a view to authorising them for export.

“The different banana producing and exporting countries must work together to implement eradication measures, together with research. Our solidarity and support to our brothers in Colombia.”