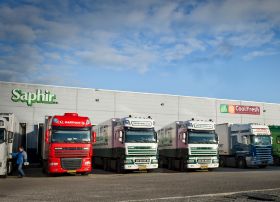 Chilean logistics operator Broom Group and its European subsidiary LCL have made their second major acquisition of the past three months in the Netherlands fresh produce arena with the purchase of coldstorage and distribution facilities belonging to Dutch company Saphir.

The business, which was sold to UK-based Jupiter Group last year as part of its takeover of Cool Fresh International, will be renamed Broom Frio, Ridderkerk, Fruitnet understands.

The deal follows LCL’s earlier acquisition of a majority shareholding in B&L Fruitlogistics, another key name in fresh fruit logistics, storage and distribution, based in nearby Barendrecht, and is expected to be followed by a further key investment in Peru later in 2020.

Group CEO Andres Nunez Sorensen said he regarded the expansion as a further extension of Broom Group’s end-to-end fruit logistics services, encompassing coldstorage and packing facilities in origin countries, so-called 3PL services, and trucking. “All in an effort to bring producers, distributors and retailers closer to each other,” he added, “using the complete fruit logistics platform offered by the group.”

Jupiter Group chief executive Mark Tweddle said he was pleased with the sale. “It allows us to focus on our core business as a grower, importer and distributor of fresh produce worldwide, simultaneously maintaining a first-class distribution service operation in the hands of our number-one global logistics service provider, LCL,” he said.

Broom Logistics Europe and Africa managing director Dawie Kok added: “The acquisition of Saphir will enable us as a group to add further value to our customers both in origin and in Europe, by also adding service components like re-packing, labelling and netting, all with a vision of having as few operators involved from farm through to the shelf of the retailer.”

The day-to-day management of Broom Frio and B&L will be handled by Brian Bakker, who said he saw increased demand for storage and value-add services in the area, supporting the ever increasing volumes of fresh produce flowing into Europe via the Dutch and Belgian ports and terminals.

Sharon Kucharek, LCL’s commercial manager for the Netherlands, also welcomes the acquisition, predicting it would enable the company to offer more door-to-door services to existing as well as new clients, from an enlarged storage and distribution facility.

For the past three years, Broom Group’s strategy has been to provide more origin and destination services and facilities for fresh produce. “Our next expansion will take place in Peru later this year,” the group revealed. “In the meantime, we welcome the former staff of Saphir into the Broom Group and look forward to their continued collaboration.”