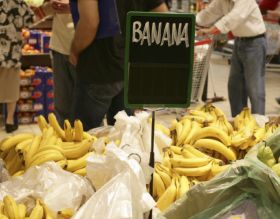 Flooding in northern Queensland has hit Western Australian (WA) banana supplies, leading to a rapid increase in prices at retailers.

Torrential rains and floodwater has cut off many transport routes, meaning that Queensland growers have struggled to supply the usual 40,000 bananas per week to the region, The West Australian reported.

Bananas were retailing at A$6.99 per kg at Herdsman Fresh this week, with prices at Coles (A$6.95 per kg) and Woolworths (A$5.98 per kg) in Innaloo also up significantly on January's prices of around A$4 per kg.

Herdsman Fresh produce manager Ron Swain told the publication that he expected the situation to ease over the next few weeks as supplies return to normal. "We're paying about A$55 per carton, when we'd normally pay between A$28 and A$20 a carton," he said.

Australian officials have marked the cost of the flooding in Queensland at A$210m, with many areas declared natural disaster zones.