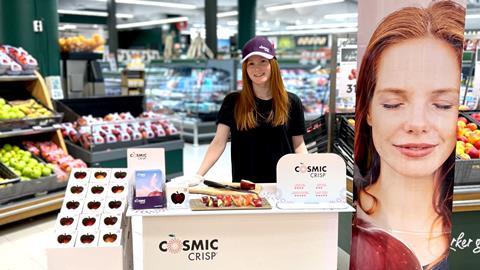 Marketers Vog and VIP say their first commercial campaign has gone well, and say more fruit will be available in 2023

The first commercial season for European-grown Cosmic Crisp apples has come to a close, with the variety’s two South Tyrolean licensees Vog and VIP both reporting a positive response from consumers and customers.

Following initial market tests in 2021, the trademarked apple made its full debut in Europe this year, with a modest volume of 1,200 tonnes sold from February to late April.

Eventually, an anticipated larger crop will mean the product will be sold as late as the summer months during future seasons.

“We are very satisfied,” commented Klaus Hölzl, sales manager at Vog. “The feedback we received from buyers and end consumers, both in Italy and in all the countries where it was marketed, was not only positive, but in some cases very enthusiastic.”

Availability was also good, Hölzl revealed: “The schedule was respected, allowing us to be continuously present on the fruit and vegetable counters of the modern distribution and wholesale channel during the two planned months.”

He added that Cosmic Crisp had also proven to be a “very convincing” apple for consumers. “Like a fine wine,” he said, “it reaches its peak quality over time, becoming even tastier and more aromatic, which is why it is the perfect apple to be marketed in the second part of the season.”

The result of a cross between the varieties Enterprise and Honeycrisp, Cosmic Crisp is part of a new generation of apples that are produced and sold in restricted quantities under licence.

First grown and sold in the US, it stands out in particular for its attractive, red-on-yellow colouring and for its remarkable juiciness, firm crunch and balanced flavour, which combines sweetness and tartness.

Grown sustainably and now also available with organic certification, Cosmic Crisp’s commercial campaign in Europe is supported by advertising that carries the slogan ‘A heavenly taste. With every bite’.

“The first commercial season of Cosmic Crisp can certainly be recorded as a success,” added Fabio Zanesco, sales director at VIP. “This apple has won over consumers with its balanced flavour and distinctive crunchiness and juiciness.”

The goal for the next season will be to expand the number of markets and customers, Zanesco continued. “Much larger amounts that will allow us to extend the commercial window until the start of the summer and to plan a major promotional campaign to support sales.”

He added: “Cosmic Crisp has a heavenly taste that you can discover at any time of day and under any sky, from sunrise to sunset.”