Areflh calls for collaboration in face of crises

The impacts of the geopolitical crisis and climate emergency can be better managed by working together, says Areflh

During this month’s General Assembly in Trento, Italy, Areflh staged a public conference on the impacts of the geopolitical crisis and the climate emergency on the European fruit and vegetables sector.

The overarching message of the event, co-organised by Assomela, the Italian association of apple producers, was the importance of collaboration in the face of food insecurity and instability as a result of war, climate change and Covid-19.

The morning session of the General Assembly saw the reelection of Simona Caselli as president and of Jean-Louis Moulon as vice-president, both for the third time.

Moulon, who is also president of French IDfel Val de Loire, vowed to call for “even more joint involvement within Areflh”. 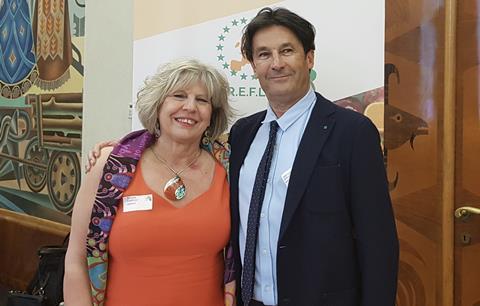 The European Parliament’s Herbert Dorfmann highlighted a letter to the European Commission signed by multiple MEPs calling for greater flexibility in managing resources allocated to POs and AOPs in order to overcome difficulties and uphold food security.

From the European Commission, Celine Keidel (DG Agro), Luc Berlottier (DG Agri) and María Pilar Aguar Fernández (DG Santé) discussed the upcoming regulatory developments regarding interventions in the sector, as well as the directive on the sustainable use of pesticides.

Luc Vanoirbeek, president of the F&V working group of Copa-Cogeca, commented: “The situation is becoming more and more difficult for producers. Dropping prices, competition and rising costs are putting fruit and vegetable companies in a very difficult situation. The sector is resilient, it will survive, however producers need a regulation framework with a European Commission that thoroughly comprehends the sector when new measures are being set up.”