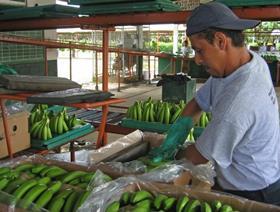 A letter signed by Gilbert Bermudez, coordinator of Colsiba (Coordinating Body of Latin American Banana and Agro-industrial Unions), and Alistair Smith, coordinator of Euroban (the intercontinental banana action network), has been sent to UK supermarkets regarding the Aldi purchase price reduction, with an analogous letter being sent to German and other European retailers by various German and international NGOs.

“In recent weeks we have received reports that the international retail chain Aldi is aiming to reduce the purchase price of bananas by almost 9 per cent from €12.41 to €11.33 for its global 2021 contract,” the letter read. “This news has been preceded by years of fierce price wars over bananas across the entire food retail trade, especially in northern Europe. The clear trend is ever decreasing purchase prices.”

In the letter, the authors expressed “deep concerns” about the consequences of this trend, which it said could not be blamed entirely on Aldi, “even if the company has become the unofficial banana price-setter for European and UK supermarket buyers”.

“In recent years, we have welcomed progress by supermarkets who have increasingly madecommitments to and reported on the implementation of human rights due diligence obligations, and in some cases made significant progress in their public reporting,” the authors stated. “The example of banana prices shows that despite these commitments, human rights due diligence practices have apparently not yet been integrated into commercial buying practices.

“Adequate human rights due diligence must also be reflected in reasonable purchase pricesand contractual conditions in order to enable these basic rights to be realised. Especially with regard to living wages, there is a direct connection between low purchase prices and human and workers’ rights violations. Lower purchase prices also stand in contradiction with the voluntary commitments by German, British and Dutch supermarkets to ensure the paymentof living wages for all men and women employed in the chains that produce the food andother goods they sell to consumers.”

Colsiba and Euroban suggested the situation was a great opportunity for the retail sector to show its commitments. “The industry can show that it has understood that human rights due diligence cannot go hand in hand with ever lower prices paid to producers,” they stated. “Reasonable purchase prices must cover production costs in order to contribute to avoiding human rights violations and negative environmental impacts.”

The letter quoted ASTAC, the banana workers’ association in Ecuador, which is the world’s largest banana-exporting country. ASTAC told Oxfam: 'Instead of further intensifying the exploitation of labour, supermarkets and especially Aldi should implement a purchasing policy that guarantees a better price for those suppliers who promote labour rights and especially freedom of association and socialdialogue with workers in order to improve working conditions on the plantations.”

Colsiba stated: 'The retailers have not yet understood that their low prices continue to cause poverty. Their strategy of delegating responsibility to private certification bodies such as the Rainforest Alliance does not lead to an improvement in working conditions and the observance of workers' rights on the plantations where they shop, and only benefitsthe retailers themselves, as they hide behind the image of the label. They are nottelling the truth to their customers.”