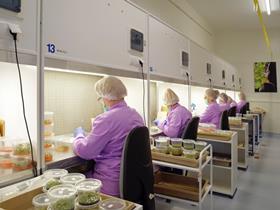 While the coronavirus outbreak has led to a drastic change in operations for some companies, Polish plant micropropagation and berry nursery specialist in-vitro Kusibab was already working to high standards of hygiene and safety.

“In vitro production has always been carried out under the highest hygienic standards, so no technological changes were necessary in the laboratory, and production volume was not limited,” explained chief executive Tadeusz Kusibab. “In the nursery, we quickly adapted to the new sanitary and epidemiological requirements. We have introduced changes wherever necessary, and employment has been maintained.”

He said that, at the beginning of the Covid-19 pandemic, as no-one knew how the situation would affect the business, the company opted not to reduce its planned production – a decision that seems to have been justified. In terms of the outbreak’s impact on the wider market, while there have been some delays in terms of deliveries, things have ultimately operated fairly normally.

“Despite few restrictions to international trade, the pickup of spring deliveries was delayed, especially to the west, the result of both the uncertain epidemiological situation and the return of overseas staff employed in German and Dutch nurseries to their mother countries,” Kusibab continued. “Fortunately, the delays have been made up and we have a fairly normal situation. Although the volume of material sales for further production decreased slightly, we have observed a clear increase in the number of smaller customers operating in local markets.

“After a relatively short period of high uncertainty related to the closing of borders, it turned out that little changed – our clients continued to implement their projects, although several very serious projects in non-EU countries were suspended.”

In-vitro Kusibab has continued to work on improving its offering. After nearly 20 years of interruption, the company has again begun the certification of blueberry planting material in accordance with EU requirements, submitting 20 varieties of blueberries to the official Polish register (COBORU). It continues to introduce new species for reproduction, and is working on entering Haskap berries onto the Polish fruit plants register.

“After several years of testing the commodity cultivation of Haskap berries, we are already sure of its yield-forming potential, we know that it can be harvested mechanically, and we have tasty varieties,” Kusibab said. “Just the promotion and development of plantings remain, before Haskap becomes another berry available on the market.”

In addition, new varieties of blueberry have appeared in the group’s offering whose reproduction is possible thanks to cooperation with GPG. Kusibab noted that blackberries were starting to gain greater popularity, as were Saskatoon berries, with new varieties available from both the US and Europe.

“We focus on serving our current customers, but of course we are also looking for new ones in new markets,” he added. “This mainly applies to countries located south and east of the European Union.”