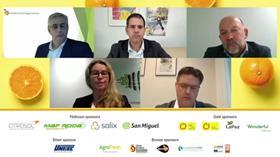 At the Global Citrus Congress, Philippe Binard of the World Citrus Organisation analysed the latest research into citrus consumption in Europe and the EU’s approach toward the promotion of healthy diets.

Since the Covid-19 pandemic, he said, more attention was being paid to the nutritional qualities of citrus, as well as to the benefits for the environment.

“We are also seeing a consumer shift toward healthy and sustainable diets,” he said. “This is a favourable marketing environment for citrus.”

Binard reiterated the EU’s commitment to boosting fruit and vegetable consumption through the promotion of plant-based diets and European school schemes.

Looking at the latest statistics, Binard reported that citrus consumption was “fairly stagnant”, with the exception of eastern Europe, which had seen dynamic growth in recent years.

Panellist Jose Antonio Garcia of Ailimpo said consumers had rediscovered the “yellow power” of lemons. “It’s a traditional product in the supermarket, but now consumers are looking at it in a more positive way due to the nutritional qualities,” he said.

Michel Jansen of Total Produce said it was important to recognise that there was no homogenous market for citrus in Europe.
“Even nearby markets like the Netherlands and France are different in terms of taste and types of retailing,” he said. “And if you look at the consumption figures, eastern Europe is growing, while western Europe is more mature.”

Concerning the best ways to stimulate consumption, Jansen suggested consumers would respond better to a health message than an environmental one.

“The big challenge is, how do we reach the consumer and with what message?” he said. “We need to ask ourselves why avocado is growing the way it is, while citrus is more stable. We lack the brands that help carry a lot of information and values to consumers. This is a challenge all over the fruit business.

“We have to recognise that retailers are still the main interactors with consumers. Social media influencers can also reach consumers much more easily than some of the more traditional means of communication.”

Werner van Pul of Greenyard said it was crucial not to play down the citrus category in communications, inferring that it’s somehow less new or dynamic than others.

“Every consumer buys citrus and knows the taste,” he said. “It’s actually one of the strongest categories, especially with the new varieties of soft citrus and the growth in use of lemons and limes.”