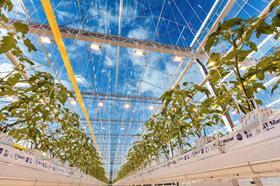 Bayer's De Ruiter Experience Center (DEC) is set to broaden its horizons to cucumbers in 2022, having previously only grown tomatoes.

According to Bayer, many hundreds of new cucumber varieties will be tested every year in the new state-of-the-art glasshouse.

The vegetable seed company said that the addition of cucumbers to the DEC underlined its commitment to protected growers and would strengthen its pipeline.

The project is also the next step in the partnership between grower BraZander, which will make the investment and own the glasshouse, and Bayer, which will lease and operate it for at least ten years.

Since 2013, Bayer has been testing new varieties of tomatoes and trialling growing techniques at the DEC, which is located in an area just outside of Rotterdam. Since 2017, commercial varieties have been grown there as well.

“The project is an exciting next step for Bayer’s collaboration with BraZander, an innovative tomato and paprika producer with whom we have an excellent partnership at the DEC,” said DEC manager John van der Knaap. “It will also change the whole outlook of the Experience Center by expanding the crops grown and make it even more relevant for the glasshouse sector.”

Owner Paul Zantman of BraZander noted: “For us it’s a great opportunity to strengthen our cooperation with Bayer and also to expand our knowledge in regards to the production of cucumber, which is a beautiful product.”

The new greenhouse will consist of 3,200 square meters with artificial light for highwire and 4,000 square metres for traditional crops.

“This testing footprint expansion in state of the art glasshouses will allow us to evaluate our new varieties under commercial conditions,” said Renske Vellekoop, head of testing EMEA protected glasshouse at Bayer.

Bayer outlined that the newly built glasshouse would help the company achieve its sustainability goals at a best practices location.

Consistent with Bayer’s digital transformation strategy, the new glasshouse will be digitally enabled. All data collection on yields will be done using a system called Gearbox.

“Gearbox gives valuable insights we never thought would be possible, which gives us a head-start,” Van der Knaap added.

The construction of the new glasshouse started in November with the intent of starting the first crop cycle in May 2022.