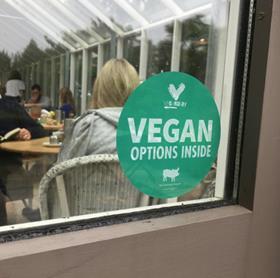 Last week, the UK government set in motion a law to lower greenhouse gas emissions by 78 per cent by 2035 compared with 1990 levels.

The target is in line withrecommendationsfrom the Climate Change Committee (CCC) and would bring the UK more than three-quarters of the way to net zero by 2050.

However, where the government’s strategy diverges markedly from the CCC is on the question of diet, according to a report from Footprint.

The press release from the Department for Business, Energy and Industrial Strategy read: “The government will look to meet this reduction target through investing and capitalising on new green technologies and innovation, whilst maintaining people’s freedom of choice, including on their diet. That is why the government’s sixth carbon budget of 78 per cent is based on its own analysis and does not follow each of the CCC’s specific policy recommendations.”

The CCC model shows that meat and dairy consumption must decline by 20 per cent by 2035 in order to put the UK on the path to net zero.

The Vegan Society described the government’s decision to ignore the CCC’s recommendations as a “cause for concern”.

“Instead of actively promoting the take-up of vegan diets, the government intends to rely on ‘new green technologies and innovation’, much of which is yet unproven,” the Society stated. “The precautionary principle would suggest that adopting practices which the scientific community  already support would be a wiser move than relying on future inventions.”

“Thereis a long listofinterventions, bigandsmall, thatdo not restrict people’s freedom to  choose, but  bring down those barriersthat  currently  discourage  people  from  choosing healthy, ethical  and climate-friendly  vegan  options,” she said.

These included making plant-based meals available in the public sector, providing support for plant-based business start-ups and raising awareness of the impact of our diets on the climate, according to the Vegan Society.

“If it wants to tackle the multiple public health and environmental crises that we face, the government must rethink  its  approach to  dietary change  before  the COP26  climate conference  later this year,” she added. “Failing to do so will mean wasted time, and wasted lives.We can no longer avoid talking about what we eat.”