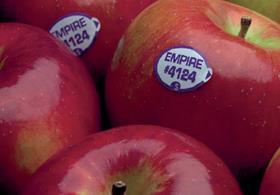 Availability of apples and pears from the Southern Hemisphere and the US on European supermarket shelves is about to come under serious threat after it emerged the EU is planning to lower the maximum residue level (MRL) for diphenylamine (DPA), an organic compound used to combat scald, from November. A decision had been expected this week, but has apparently been postponed until late March.

As revealed in UK weekly the Fresh Produce Journal, the European Commission recommended to an EU standing committee late last month that the MRL for DPA should be set at 0.1ppm. The currentMRLis 0.5ppm, meaning a huge amount of fruit will no longer be permitted for sale. Although approved in the US and many other Southern Hemisphere countries, DPA is no longer registered for use in Europe, although emergency use can be granted.

Writing in the FPJ, New York Apple Association president Jim Allen said exporters would have “no choice but to walk away” from the European market if the planned reduction went ahead. “We want to continue our relationship with Europe, but our shippers would survive without it,” he continued. “If Europe was removed from the equation, they would definitely move away from Empire to a degree.”

Adrian Barlow, chief executive of English Apples and Pears, said the situation would lead to gaps in supply. “The thing I fear is countries will decide not to export into Europe, so there is likely in summer to be a shortage of apples on shelves.” He added that the UK could meet the newMRLthanks to a combination of investment in high-quality stores used in combination with SmartFresh, but there were major concerns about cross-
contamination. Producers are understood to be concerned about the marketability of the late-season crop under the proposed MRL.

Anton Rabe, executive director of Hortgro Services in South Africa, revealed extensive consultations had been held behind the scenes with EU officials via the country’s industry associations, as well as the World Apple and Pear Association and Freshfel Europe. “I think the processing countries are in sync in terms of what those mrls should realistically be and hopefully sanity prevails,” he said. “If not, it won’t just be a South African problem – it will be a world problem. And in that regard one would expect some dispensation would be granted at least for the next two to three years.”

Rabe added that South Africans have been exploring long-term controlled atmosphere storage with alternative chemicals and modified atmosphere, and expressed confidence growers could meet the newMRLs. However, he did express some concern over potential issues relating to cross-contamination.

Manufacturers of DPA have come together to appeal against the withdrawal of the product. A ruling is expected before the end of June.