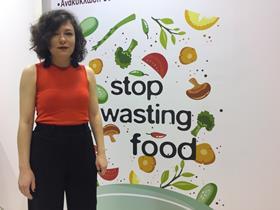 Thessaloniki’s wholesale market has begun to redistribute surplus fresh produce to charity as Greece starts to catch up with other European countries in the war on waste.

Food waste remains a relatively unexplored issue in Greece, but various initiatives are now starting to emerge in the country as part of the EU’s Food 2030 initiative to create more sustainable food systems.

Malnutrition has emerged as a major problem in Greece in recent years, following almost a decade of economic recession and the arrival of tens of thousands of asylum seekers fleeing war in the Middle East.

Over 60,000 asylum seekers are currently trapped in Greece due to sealed borders across the so-called Balkan route and the EU-Turkey accord on refugees.

One locally organised project, publicised at the Freskon 2018 trade show in Thessaloniki, is Save The Food – a scheme to cut food waste at the city’s Central Market and feed those in need, for example, refugees, poor families and homeless people.

Every day an estimated five tonnes of agri-food products are thrown away at the wholesale market, which houses 280 fruit and vegetable wholesalers and sells approximately 600-800 tonnes of fresh produce on a daily basis.

From May 2016 to April 2017 wastage was calculated at 1,437t, and the market’s stated “final goal”, which also covers plastic waste, is to “reduce or even eliminate the amount of waste deposited in sanitary landfills through recycling and reuse of every useless piece of packaging and non-commercially valuable food”.

The market plans to achieve this target by improving the collection, sorting and utilisation of traders’ surplus produce and used packaging. This has seen food being donated - after quality control - to charities and voluntary groups, and organic waste being collected for compost and biogas units.

In addition, the project wants to raise awareness of the food waste issue among Thessaloniki’s inhabitants, and encourage them to get involved and help solve the problem.

The initiative, which began just two weeks ago, follows a successful food redistribution trial at the market in December 2017. This saw the market prepare meals from surplus food and send it to various charities and municipalities in the city, helping families without the means to feed themselves.

“It was Christmas, and in the spirit of giving, people were quite receptive to the idea,” said Meni Georgopolou, who was promoting the initiative at Freskon on 26 April. “I think almost every portion was distributed.”

She added: “The wholesale market has now asked its vendors to offer up all the food that cannot be used so they can redistribute it to various charities for refugees, migrants and homeless people, among others.

“We’re very excited about the project, and it will be a major initiative in the future, but for the moment it’s still early days.”