IPA award is the cherry on the cake for Asoex

Representatives of Asoex and the Chilean Cherry Committee travelled to London this week to pick up an international award for their Cherries from Chile marketing campaign in China. 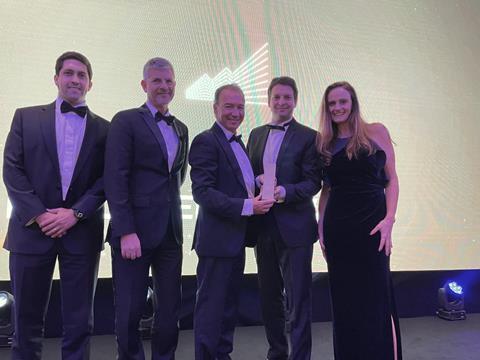 Iván Marambio, centre, at the awards ceremony in London

The committee were named winners of the second prize for ‘best B2B’ at the Institute of Practitioners in Advertising (IPA) Effectiveness Awards 2022, regarded as the Oscars of the advertising world, for the campaign, which was developed with ProChile.

Asoex president Iván Marambio commented: “We are very happy to have been distinguished in this international award, as it symbolises all the effort, work, creativity and professionalism to position our country and its fruits in a market as important as China, where its consumption has tripled in recent years.

“This shows that by working together and in a public-private manner, successes can be achieved that position the Chile brand and make our fruits admired for their quality throughout the world, generating benefits for all.”

ProChile’s general director Paulina Valderrama said it was a source of pride that ProChile and Asoex’s work on the Cherries from Chile had been recognised.

“This award highlights this fruit, the added value that exists in its production and the people who, with their dedication, contribute to the positioning of Chilean cherries in the minds of Chinese consumers,” she said.

The award recognises the impact of the marketing campaign implemented for Chilean cherries in China from 2016 to 2020. During this period, cherry consumption tripled in China, and Chilean exports grew by 160 per cent from US$552m FOB to US$1.434bn FOB.

The additional impact of the campaign was calculated to be US$111.1m in this period, with a return on investment of 480 per cent.