Morocco’s recent growth in blueberry and raspberry production has much to do with its proximity to Europe, but other exports markets are increasing every year, says Nabil Belmkaddem, general manager of cooperative BestBerry

Morocco has made significant progress in recent years in terms of berry production. Would you tell us a bit about the development you’ve seen in the past years?

What are some of the advantages that Morocco has?

NB: Of course the geographic closeness of Morocco to Europe is essential in providing a short transit time between Moroccan production areas and the main European markets. Morocco has adequate infrastructure and logistical know-how to transport fruit in optimal conditions. Morocco has a stable political and financial system that encourages European companies to invest in Morocco. Our labour is skilled and our climate provides for a long frost-free growing season. 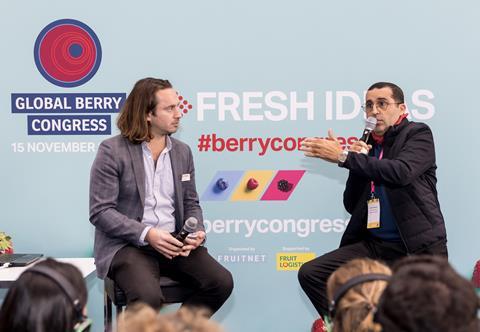 Have you seen increasing interest from the European market?

NB: Naturally, the winter window of production makes Morocco quite competitive and attractive to European markets. Overall the berry business in Morocco is an extension of the European berry business with the general goal of fulfilling demand from European markets. But Moroccan exporters are also shipping fresh berries to the Middle East and Russia and sending to Asia by air. This business is increasing year after year.

NB: Indeed higher temperatures are an issue. For example, flower initiation of strawberries has been impacted by higher night temperatures in the nurseries and in the fields after planting, and we now have a gap of production that is unusual this time of year.

What about labour availability?

NB: It is becoming harder to get adequate labour all season long and growers are adapting to this situation by making transport available to bring workers from farther areas.

Are companies in Morocco investing in high-tech machinery?

NB: We are seeing an interest in the use of specialised equipment for the sorting of blueberries, as well as the use of heat sealing machines with carton punnets and optical sorters for frozen berries. Fresh berry companies and cooperatives provide solutions for the outsorted production of their members and therefore invest in freezing production lines.

What are the biggest challenges at the moment?

NB: The main challenge for Moroccan growers is demand or market uncertainty. There are weeks where Moroccan production is sold at very low prices and this has a major impact on grower return. Rising production costs are a chief concern for growers trying to remain profitable, but they have not prevented investments in solar panels for irrigation for example. The main concern is the sustainable use of irrigation water, as a lack of rain is alarming in Morocco. Also, berry production generates a lot of plastic waste, and major efforts need to be made in recycling.